The Crook County Courthouse in Prineville was completed in 1909, built with native basalt from a quarry west of town. With a basement, two main floors, an attic, and a three-story clock tower, it was one of the tallest buildings in Oregon at the time. Its construction not only came with a long and troubled financial cost, but also caused a fissure in county unity.

For many years, the residents of western Crook County had complained about high taxes and a lack of services, especially good roads. So in 1906, when county officials announced that the bid to build a new courthouse was $75,000, county residents staged a protest and obtained an injunction from a judge in The Dalles on the grounds that the building would incur unwanted indebtedness. After the judge ordered Crook County to limit its debt, the county court again asked for bids, and in 1907 accepted a lower one and collected subscriptions from taxpayers.

The courthouse contract was awarded to Wright and McNeely for the stone foundation and superstructure, based on a design by Salem architect W.D. Pugh. The old courthouse, completed in 1884, was moved off site (it later became a school annex). After building the aboveground basement and three flights of stairs, the builders defaulted, and a new contract was awarded to J.B. Shipp for $57,000. By the time the county accepted the completed courthouse in May 1909, the total cost had risen to $74,960. Less than two months later, the building needed repairs for its foundation and window casings.

Dissatisfaction with county government, combined with the often difficult journey to Prineville to conduct county business (including voting), was growing among the residents of western Crook County, and the courthouse became the catalyst for serious talk of dividing the county. Bend, in particular, was becoming an economic and population rival to Prineville. Newspapers in Bend and Madras were highly critical of the courthouse construction and challenged its cost and usefulness to western Crook County constituents. Public pressure and population growth led to Jefferson County dividing from Crook County in 1914, just a few years after the new courthouse opened; Deschutes County broke off in 1916.

The Crook County Courthouse was remodeled in 1941. In addition to updates to plumbing, wiring, and heating systems, two of the three exterior flights of stone stairs were removed to create space for offices and a new interior stairway. When the tower clock stopped in 1972, the local United States Bicentennial Committee spent three years raising money to remove the clock and take it to Portland’s Alder Street Clock Shop for restoration. Local Boy Scouts cleaned the tower and built new clock hands from donated materials.

After a severe windstorm in December 1989, a structural engineer determined that the courthouse was “in imminent danger of collapse,” and the building was evacuated. The clock tower and walls were reinforced, and by the end of the year the building was declared safe. “Suspicious” cracks were found a week later where a main beam had split in two. Engineers believed that plaster walls were almost all that held the building up, since many of the walls were found to be hollow. The repairs were made for $170,000, financed by the county, and the building was once again occupied by April 1990.

With its extensive front lawn and shade trees, the courthouse is a focal point in downtown Prineville. The tower clock is still wound by hand once a week, and county employees give guided tours of the tower throughout the summer. For decades, people from all over the world have left their names on the exposed wood in the tower. County officials designated the Crook County Courthouse a “perpetual historical monument” in 1963.

Today, the county clerk, the community development department, the county court and judge (county administrators), the circuit court, and the district attorney have offices in the courthouse. 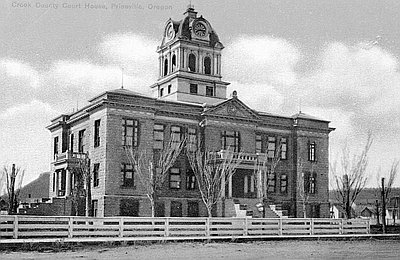 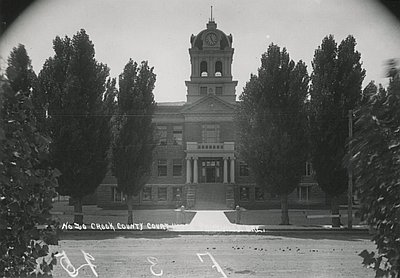 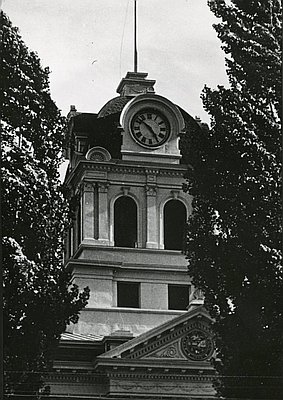 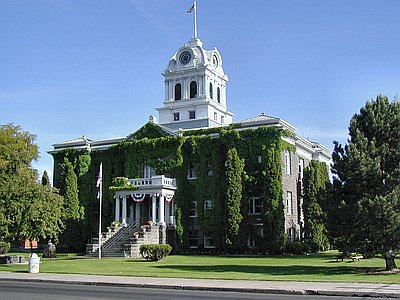 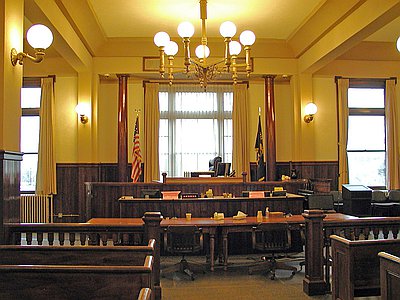 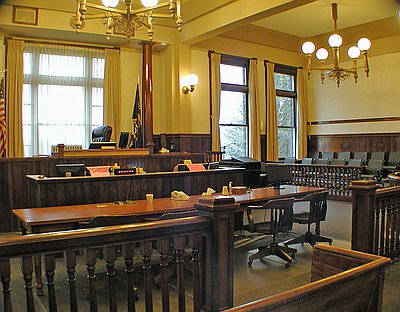 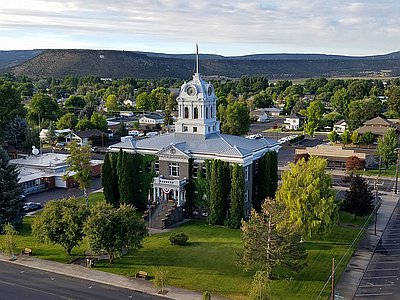