In the lower right-hand corner of his magnificent Chart of the NW Coast of America and NE Coast of Asia explored in the Years 1778 & 1779, James Cook set down the first notations of the Oregon Coast on an accurate modern map. He created the map during his third voyage to the Pacific, an exploration of the great ocean that, in part, probed the northwest coastal region of North America in search of a Northwest Passage, a hoped-for seaway through North America between the Atlantic and Pacific Oceans.

Cape Perpetua and Cape Foulweather are marked on Cook’s chart as prominent outcroppings that puncture the Pacific Ocean, but tempestuous sea conditions pushed Cook far off shore as he sailed north along the Oregon coastline, so his map did not record other significant maritime locations in Oregon, including the Columbia River. He took his ship, the 110-foot and fully rigged HMS Resolution, back to the Northwest Coast near the Strait of Juan de Fuca, where he noted and named Cape Flattery, before continuing north to Nootka Sound on the west coast of Vancouver Island.

Cook first sighted North America in early March 1778, after sailing from Hawai’i. The naming of Cape Foulweather is documented in Voyages on March 7: “We now had seventy-three fathoms of water, over a muddy bottom, and found ninety fathoms about a league farther off. The land, which was of moderate height, appeared to be diversified with hills and vallies, and principally covered with wood. No very striking object, however, presented itself except an high hill, with a flat summit, which bore east from us at noon. The land formed a point at the northern extreme, which Captain Cook named Cape Foulweather, from the exceeding bad weather we afterwards met with.”

Cook’s map appeared in A Voyage to the Pacific Ocean . . . Performed under the direction of Captains Cook, Clerke, and Gore (1784), which provided the first cartographic description of the North Pacific and included textual descriptions of a valuable commodity, luxurious sea otter furs that could be acquired through trade with North Pacific Native people. News of the potential sea-otter trade stimulated a rush to the region and a new trans-Pacific trade with China, a major development that brought attention to the Pacific Northwest region and, eventually, Oregon. Cook’s map can be considered the first world advertisement for what would become the Oregon Country.

James Cook, who led maritime expeditions to the Pacific Ocean three times between 1768 and 1779, is considered one of the world’s great explorers. Born in Yorkshire in 1728, he first went to sea in 1746 as an eighteen-year-old on a ship hauling coal. By 1755, he had become a proficient navigator, and he joined the Royal Navy during the Seven Years’ War with France, when he first saw North America as a chartmaker on a frigate that visited Newfoundland. His abilities led the British Admiralty to select him as captain for a scientific expedition that circumnavigated the world in 1768-1771.

Cook died on his third Pacific voyage, when Natives in Hawai’i set upon him and other British seamen at Kealakekua Bay. The conditions and rationale for Cook’s murder on February 14, 1779, have been debated ever since by historians, anthropologists, and folklorists. Cook’s second-in-command, Charles Clerke, took charge of the expedition for additional exploration and the return to London.

Cook left a wife, Elizabeth, whom he had married in 1762, and six children, none of whom lived out the eighteenth century or had offspring. Elizabeth Cook died in 1835.

Beaglehole, J.C., ed. The Journals of Captain James Cook on His Voyages of Discovery. Vol. 3: The Voyage of the Resolution and Discovery, 1776-1780. Cambridge: Cambridge University Press, 1967. 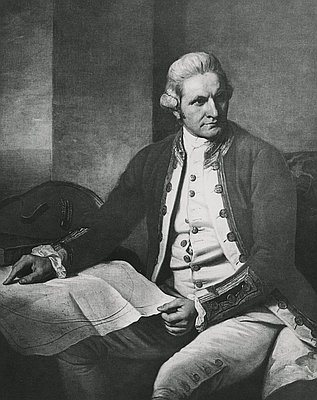 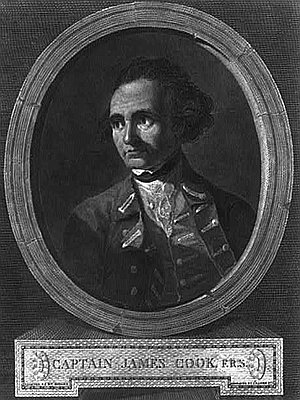 The cartographic history of Oregon as a place in the Pacific Northwest began long before European visitation to the region. Mapmakers initially conceptualized the presence of a separate North American continent in 1507, some 234 years before the first recorded sighting of a landmark on the Pacific Northwest coast in …

The role George Vancouver played in Oregon history is tangential, yet it is foundational to the developments that radically changed the region during the early nineteenth century. In 1791-1795, Vancouver led the most thorough scientific maritime exploration of the Northwest Coast of North America, which included the creation and publication …

On May 11, 1792, Robert Gray, the first American to circumnavigate the world (1787-1790), sailed the Columbia Rediviva into the Columbia River, the first documented ship to anchor in the river’s broad estuary. He named the river “Columbia’s river” after his ship and drew a sketch map of the river …