Edison Chiloquin earned international attention in 1974 when he refused to accept a $273,000 payment from the federal government as compensation for terminating the Klamath Tribe. He was the only tribal member to do so. In refusing payment, Chiloquin said: “It would be like selling a part of you or a part of our ancestors. This is sacred land where my grandfather lived. His bones are here. I belong here.” Chiloquin repeatedly said that no value could ever be placed on land where his relatives lived. He lived simply and did not consider money important.

Chiloquin was born on August 31, 1923, in the town of Chiloquin, the son of Kilda and Margaret Chiloquin. He lived his entire life in Chiloquin, except from 1943 to 1945 when he served in the U.S. Army. He won the Silver Star, Bronze Star, two Purple Hearts, and other medals.

Chiloquin was also an alcoholic. “I was pretty well known here as the town drunk for a while,” said Chiloquin, who wrote and published an occasional community newsletter called The Teetotaler, reflecting his sense of humor and irony. His daughter, Laurel Robinson said: “He talked about how overseas he could go into any place. But he came home and signs on the bars said, ‘No dogs or Indians.’ To me [quitting drinking was] one of his greatest feats.”

Congress had passed the Klamath Termination Act in 1954, and all federal services were lost in 1961. The tribe also lost a million acres of ponderosa pine forest and their claim to the headwaters of the Klamath River.

In 1954, 1,659 of the 2,133 enrolled members of the Tribe each received $43,000 from the federal government. By many accounts, the payment was a disaster for the Klamaths. They received no financial counseling or consumer education and were often charged excessive legal fees, and many squandered their payments. In addition, termination resulted in tribal members losing federal benefits, such as housing, education, and medical care.

In November 1974, the 473 “remaining members,” including Chiloquin, received their payments. Instead of accepting his payment, however, Chiloquin lit a Sacred Fire at the site of his grandfather's village along the banks of the Sprague River near Chiloquin, a town named for his grandfather. The fire burned continuously for five and a half years, beginning on April 18, 1976. Chiloquin along with his family and friends erected teepees and built an earth lodge, sweat lodge, and stone-lined fire pit at the village. He maintained the fire to “have the smoke from the fire carry prayers for the land to the Creator.”

In January 1980, President Jimmy Carter signed the Chiloquin Act, which gave Edison Chiloquin and his descendants title to 580 acres for what is known as Pla-ik-ni Village. The boundaries for the village were finalized on April 8, 1985. The Klamath Tribe was eventually restored on August 28, 1986, but it received no land base. During his lifetime, Chiloquin was sometimes not embraced by other tribal members, but in recent years some tribal members have asserted that his refusal to let the government take his land was a factor in the tribe seeking restoration.

For years, Edison Chiloquin hosted public gatherings, school field trips, college groups, people from other tribes, visitors from foreign countries, and others who showed an interest in Klamath cultural activities.

With his wife Leatha, whom he married in 1969, Chiloquin wrote Return of the Raven, a book about local traditions. Chiloquin was also an artist who sold his paintings and pen-and-ink drawings.

Leatha died in 1979, and Chiloquin remarried in 1984. He and his wife Carla had a daughter; the couple later divorced. Edison Chiloquin died on May 17, 2003. His land remains in his family, but it has been only infrequently used for public gatherings. 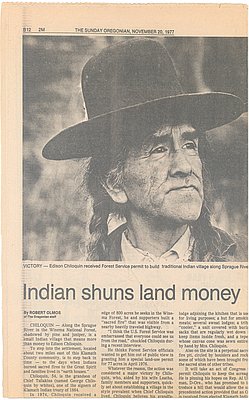 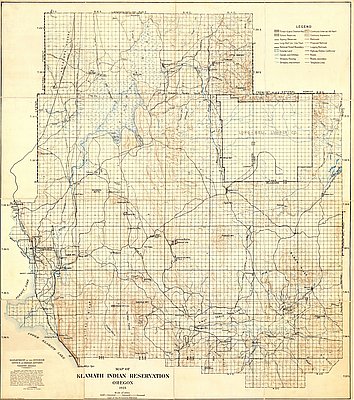