Windswept Cape Blanco—situated at N 42˚50'08.12", W 124˚33'51.16"—is the farthest western point on the mainland of Oregon. It is also the second-most westerly point of the contiguous United States (Cape Alava, Washington, exceeds Cape Blanco by some nine minutes of longitude).

Located about five miles north of Port Orford and three miles west of Highway 101, Cape Blanco may have been the "white cape" sighted and named by Spanish navigator Martin de Aguilar in 1603. After de Aguilar, the Oregon Coast remained essentially terra incognita to non-natives for another century and a half, when Spanish maritime explorer Juan Francisco Bodega christened the point Cabo Diligensias in 1775.

British naval Capt. George Vancouver dubbed it Cape Orford while coasting the vicinity in 1792. Although his toponym did not endure, it eventually came to be applied to the small harbor to the south. By the early nineteenth century, the name Cape Blanco was commonly shown on maps.

The cape is a forty-eight-acre headland, somewhat triangular in outline, that projects west beyond the rocky beaches located immediately to the north and south. This cliff-faced, level-topped landform, lashed by waves on three sides, towers some two hundred feet above the surf. Cape Blanco consists of a series of uplifted marine sediments: late Cretaceous (80 to 60 million years ago) at the base, Eocene (50-30 million years ago) in the higher strata, and topped by very recent Pleistocene gravels (less than 500,000 years ago). Like much of the Oregon Coast, Cape Blanco is a young, emergent landform, in this case the portion of an ancient wave-flattened marine terrace that is slowly rising above sea level.

In 1867, the U.S. government purchased the headland from John and Mary West for the site of a navigational beacon. Built in 1870, Cape Blanco's fifty-nine-foot-tall brick tower is the oldest lighthouse remaining in Oregon. East of the cape, before and after the turn of the nineteenth century, large herds of sheep grazed the extensive grasslands on the larger Cape Blanco terrace between the Sixes River on the north and the Elk River to the south.

Soon after World War I, the U.S. Navy erected a radio transmitter a short distance from the lighthouse. Only portions of this facility's concrete footings remain, the rest having tumbled down the ever-retreating face of the cliff. In late September 1942, a small airplane catapulted from the deck of a Japanese Imperial Navy submarine that had surfaced a few miles offshore. The pilot, Nobuo Fujita, flew directly over the Cape Blanco lighthouse, using it as a landmark during his flight in an effort to firebomb forestland in the rugged headwaters of the Elk River. It was the second of two bombings by enemy aircraft during the war in the contiguous United States (both missions flown by Fujita that September).

At the end of World War II, the U.S. Coast Guard built a LORAN station at Cape Blanco. This long-range radio marine-navigation system operated into the 1970s, when global-positioning systems rendered LORAN technology obsolete. A fierce January 1950 storm toppled the Coast Guard's first LORAN antenna, resulting in a sturdier replacement. Served by a small resident contingent of enlisted men and their families, the station ceased operations in 1979, and most of its buildings have since been removed. One of the remaining structures houses radio-communications equipment used by the U.S. Fish and Wildlife Service and other agencies.

The Bureau of Land Management, under a permit from the Coast Guard, maintains the historic lighthouse, and the Oregon Parks and Recreation Department in collaboration with the Cape Blanco Heritage Society provide tours. The federal government transferred the eastern third of the property to the state for inclusion in the 1,800-acre Cape Blanco State Park. Kite flying on the cape is among the favorite activities of park visitors.

As the narrow isthmus of slumping, landslide-prone ground that forms the connection between the cape and the main terrace continues to erode, Cape Blanco may eventually become simply another "sea stack" separated by saltwater from the continent's landmass. 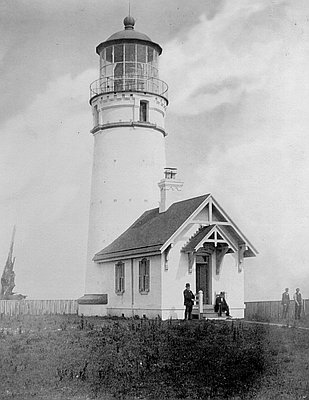 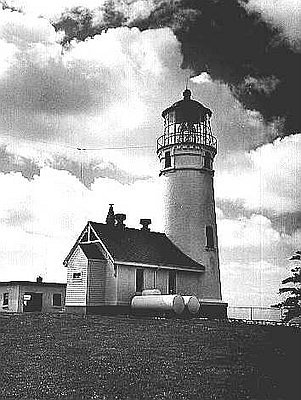