Built in 1898, the Patrick and Jane Hughes House in Curry County is a significant survivor of a large, prosperous ranch and dairy business operated by Patrick Hughes and his family. Located just north of the headland of Cape Blanco, the imposing house was built on an elevated terrace immediately south of the Sixes River, with a view of the ocean. It is considered the best preserved, largely unaltered, late nineteenth-century house in the county.

Patrick Hughes, born in County Tyrone, Ireland, in 1830, immigrated to the United States in 1855. He met and married Jane O’Neil, and the couple sailed for California in 1856. Patrick Hughes worked at gold mining before traveling north to Curry County, where his wife joined him. Hughes was reportedly attracted to the Oregon Coast by gold mining on the Sixes River, where he developed and ran a black sand mining operation for several decades.

In 1860, Hughes began a dairy and livestock business, eventually acquiring a thousand acres around Cape Blanco (his sons later expanded the ranch to 1,800 acres). Dairying proved to be a successful enterprise in Coos and Curry Counties, though it would be nearly four decades before the couple built the large, two-story house near Cape Blanco. While Patrick Hughes occupied the house for only about three years before his death in 1901, Jane Hughes continued to live there until 1923.

The Patrick and Jane Hughes House is a good example of what can be called the vernacular Queen Anne/Eastlake style. It is perhaps the most significant work of local builder-contractor Pehr Johan (Peter John) Lindberg (1851-1920), who was born in Sweden and settled in Port Orford in 1882. Nearly all of the houses built by Lindberg are marked by the abundant use of variously cut cedar shingles, used to shape patterns on the exterior of the walls. In the Hughes house, diamond-shaped patterns are used in the gables, and semicircular fish-scale and reverse-fish-scale patterns are used on the lower walls. Lindberg also built his own shingled house in Port Orford (1892); the residence of the Hughes’ son, James S., who served for twenty years as Keeper of the Cape Blanco lighthouse; the house of Hughes’ daughter and son-in-law, Alice and Patrick Masterson (c. 1900); and several other houses and buildings in Curry County.

Patrick Hughes commissioned other buildings, including a small Catholic chapel called St. Mary, Star of the Sea, built on Cape Blanco in 1893, with an adjoining cemetery. Although the chapel is now gone, the cemetery survives. Also gone from the Patrick Hughes homestead are structures described in 1981 by great-grandson Patrick Masterson, including a large washhouse and bunkhouse, a small chicken house, a slaughterhouse, a hip-roofed smokehouse, a creamery, and a dairy barn.

The last of the Hughes descendants occupying the ranch house lived there until 1971, when it was acquired by the State of Oregon and incorporated into the Cape Blanco State Park. The historic Patrick Hughes House is open to the public April through October. 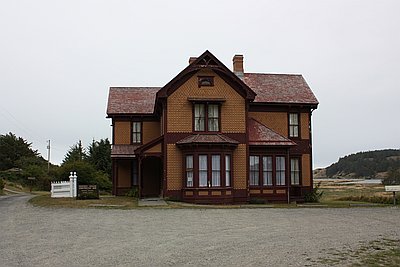 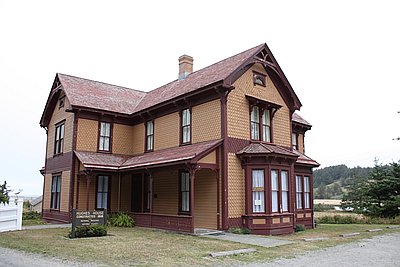 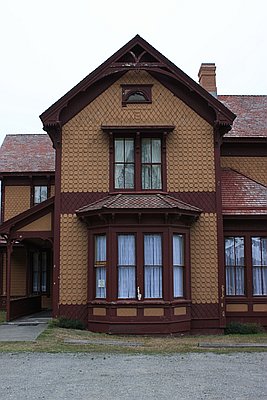 Windswept Cape Blanco—situated at N 42˚50'08.12", W 124˚33'51.16"—is the farthest western point on the mainland of Oregon. It is also the second-most westerly point of the contiguous United States (Cape Alava, Washington, exceeds Cape Blanco by some nine minutes of longitude).

Located about five miles north of Port Orford and …