For over a century-and-a-half, buckaroos have done the work on the ranches and rangeland of southeastern Oregon. They are a distinctive brand of the legendary American cowboy who evolved from the vaqueros (a Spanish word similar to cowboy) of early California.

In 1769, Gaspar de Portola's expedition began the Spanish colonial settlement of California. Their commissary was a herd of cattle managed by Mexican vaqueros. Their equipment reflected a pride in their work: silver inlaid bits and spurs, finely crafted rawhide gear, and tooled leather saddles. They were expert at roping with hand-braided rawhide reatas and skillfully training their horses.

After 1848, American rule and the California Gold Rush transformed California; most of the ranchos came under Anglo-American ownership, but the vaqueros still rode the range. By the 1860s, a severe drought and anti-ranching legislation by California farming interests forced cattleman to look north for new rangeland, beyond the Sierra Nevada.

In the summer of 1869, California cattleman John Devine’s herd of trail-worn cattle, a chuck wagon, a Chinese cook, and a dozen or so vaqueros arrived at Fort C.F. Smith on Whitehorse Creek, east of Steens Mountain in southeastern Oregon. They established Whitehorse Ranch near that location and, along with it, the beginnings of a rangeland culture that is still valued in this far corner of Oregon.

Other California stockmen and their vaqueros soon followed John Devine. In 1872, Sacramento Valley stockman Dr. Hugh Glenn sent Peter French north into the Oregon High Desert where he established the P Ranch in the Blitzen River Valley west of Steens Mountain. In 1875, Amos Riley and James Hardin claimed the range in the Wagontire Mountain country. By the 1890s, much of southeastern Oregon was dominated by the California-based ranching empire of Miller & Lux (Pacific Livestock Company).

By the 20th century, the word “vaquero” had been anglicized into “buckaroo,” a name that still denotes a horseman who  continues the tradition dating from colonial Mexico and the Californios of two centuries ago. The way of life of the vaquero has become ingrained in the working life of the region's ranches. Today buckaroos still ride for many of the region's big outfits: the ZX, the Alvord, and Whitehorse ranches. 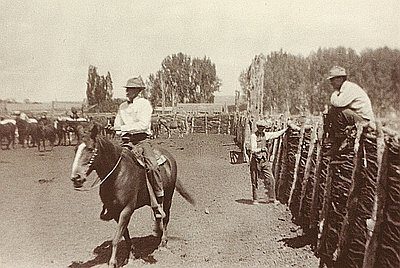 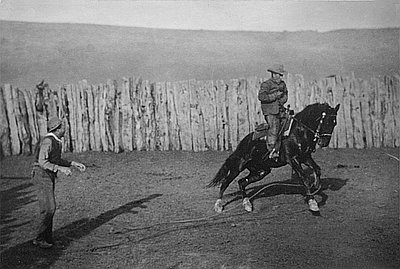 Oliphant, J. Orin. On the Cattle Ranges of the Oregon Country. University of Washington Press, 1968.