John Brown Canyon heads on Agency Plains, seven miles north of Madras, Oregon, and descends west about three miles into the main canyon of the Deschutes River. Campbell Creek flows along its bottom, and the Highway 26 grade was cut into its north slopes. The canyon was officially named in 2014 for its first resident, an African American pioneer named John A. Brown, by the Oregon Geographic Names Board after a proposal made by the Jefferson County Historical Society.

Originally from Polk County, Brown moved onto land near the canyon's mouth in 1881, filed a claim for 160 acres there in 1888, and received title to the property for “proving up” (meeting the requirements for ownership) on it as a homesteader in 1891. With his Native wife and daughter, he farmed an irrigated plot of fruit trees and vegetables and regularly sold his produce in Prineville, thirty miles away.

Brown sold the place in the late 1890s and moved to the foothills of the Cascade Mountains near Crane Prairie, where, according to local oral history, he had gold-mining interests. Brown Mountain and Brown Creek in that area are both named for him. He died in 1903 in Prineville, where the locally prominent Glaze family were old friends of his, and he is buried in Juniper Haven Cemetery there, initially in the paupers' section in an unmarked grave. In 2007, the Crook County Historical Society erected a monument at his grave in recognition of his historical importance as probably the first African American homesteader in central Oregon.

In the years after Brown left the canyon, it was identified locally as the pejorative "N----r Brown Canyon," but that name dropped out of use in the 1940s. As a result, the canyon went without any name on maps and in print until Brown’s identity was rediscovered in 2003 by members of the Jefferson County Historical Society. The canyon was officially registered under his name in 2014 by the Oregon Geographic Names Board. 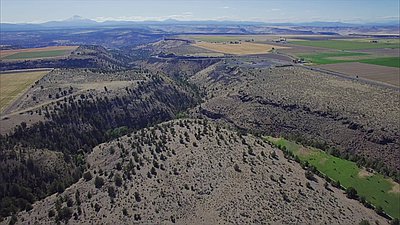 George Washington Bush was born c. 1790, the son of an African American servant and an Irish maid. While many pioneers earned reputations as rugged individualists, Bush epitomized compassion and selflessness, traits that helped him become one of the most important leaders of the first group of American citizens to …

The Willow Creek basin that cradles Madras held four homesteads in 1902 when John Palmehn platted the town. It was initially called Palmain, an Americanized version of Palmehn, but the U.S. Postal Department denied that moniker, noting it too closely resembled Palmer, a community that has long since vanished. Debate continues …

When Congress passed the Oregon Donation Land Law in 1850, the legislation set in motion procedures for the disposal of public lands that left a permanent imprint on the Oregon landscape. The grid-square pattern of property ownerships imposed on rural lands in the Willamette, Umpqua, and Rogue valleys is visible …