The High Desert town of Bonanza—elevation 4,127 feet—is located twenty-five miles east of Klamath Falls and about twenty miles north of the California state line. At the center of the cloverleaf of three ranch and forest valleys and one mountain region, Bonanza is where ranchers, mountain residents, and seasonal hunters and fishers stock up on supplies and local news.

John S. Shook established the Bonanza post office in 1875 at the site of the Big Springs on Lost River. Bonanza is Spanish for “great prosperity” or “abundance,” and it is believed the town’s name referred to the many suckerfish caught at the Big Springs by Native people who camped there each year. Shook, who enlisted as a scout during the Modoc War, raised livestock and located a sawmill at Big Springs.

By 1910, Bonanza boasted the Shook sawmill, a hotel, blacksmith, bank, creamery, newspaper, boardinghouse, school, flourmill, slaughterhouse, and a brickyard. Cattle and grain were the region’s chief products, and Bonanza was important enough in Klamath County that it was a contender for county seat. Devastating fires, however, scorched the town in 1910, 1913, 1914, and 1930, each time destroying shops, homes, and businesses. Later fires also plagued the town, including a 1944 fire that destroyed the school.

In 2015, Bonanza had a population of 450, and its school, post office, churches, gas stations, general store, and clinic serve the 4,600 residents of Langell, Poe, and Yonna Valleys. In the twenty-first century, the Big Springs has experienced low water levels, but the region continues to produce cattle, dairy, and alfalfa.

The same community spirit that rebuilt the town four times continues to thrive in Bonanza. Civic organizations include volunteer fire and ambulance services, a city hall, the Bonanza Cares Community Organization, a Lion’s Club, a cemetery, and an irrigation district. The town also has Big Springs Park, a city park; the Bonanza School, which serves K-12 students; the Bonanza Library and Community Center; and four churches. Annual community events include farmers markets; a chili cook-off, craft fair, and car show; Arts in the Park; Halloween Trunk-or-Treat, where residents decorate their cars and hand out candy to trick-or-treaters; and a Christmas bazaar. 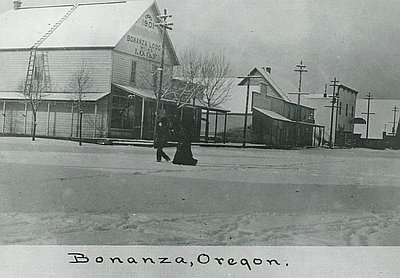 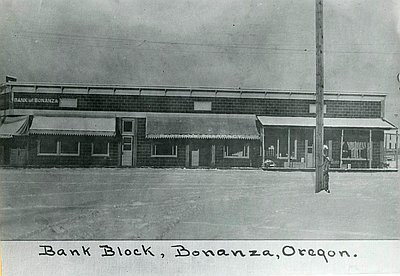