Oregon's first major book publisher, Binfords & Mort, was established in 1930 to publish fiction and non-fiction works about the Pacific Northwest. During its heyday, from 1930 to 1960, the firm was an integral part of regional study and the promotion of regional literature. Binfords & Mort published several important titles, some still considered definitive, including History of Oregon Literature, by Alfred Powers; Oregon Geographic Names, by Lewis McArthur; Dictionary of Oregon History, by Howard McKinley Corning; and A General History of Oregon (2 vols.), by Charles Carey. Binfords & Mort also published Oregon county and city histories, juvenile historical fiction, natural history, and regional poetry.

Peter and Maurice Binford had established the Metropolitan Press, a Portland printing business, in 1899. As the business expanded, it became clear that there was a market for new books about the Pacific Northwest, and the Binfords started a publishing firm under the umbrella of Metropolitan Press.

The first books published by this new press were carefully selected. They included important works such as Thomas Nelson Strong's Cathlamet on the Columbia and Frederic Homer Balch's Bridge of the Gods, whose copyrights had expired, as well as the works of Oregon authors Alfred Powers, Howard McKinley Corning, Charles Carey, Ben Hur Lampman, and Robert Ormond Case. During these early years, the company also obtained the lucrative publication rights to the WPA guidebooks for Oregon, Washington, Nevada, and Utah.

By 1937, sales were strong enough that William Morrow, a major New York publishing firm, offered to handle national distribution for the press. Morrow recommended that the press needed a more original imprint. The Binfords selected Binfords & Mort, reflecting the addition of a new business partner, Ralph Mort (the name Metropolitan Press was retained for the job-printing business).

By 1957, both Maurice and Peter Binford had retired, and Maurice's son Thomas took sole control of the publishing operation. The company's name was once again changed, this time to Binford and Mort. Although the company published an average of ten titles a year, the quality of production and literary merit began to wane, partly because Thomas Binford never replaced the design and editorial talent his father and uncle had assembled. After Thomas Binford's death in 1983, the company was sold to the Gardenier family of Hillsboro, who continue to distribute back stock and occasionally issue new titles. 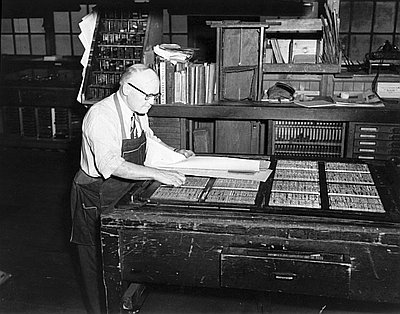 Ayres, Leona. The History of Binfords and Mort, a Regional Publishing Company, in Portland, Oregon with Critical Annotations of its Juvenile Books in Print in December, 1954. Thesis, University of Washington, 1955.