The Bend Amateur Athletic Club Gymnasium, also known as the Old Bend High School Gym, is located at 520 Northwest Wall Street in Bend. Once the cultural and recreational heart of the city, the building survives as the center for the Boys and Girls Club of Central Oregon. The gymnasium, which is a blend of Mission and Jacobean styles, is distinguished by decorative concrete plaques that depict Native American athletes.

In 1915, Bend experienced an economic boom, with construction begun on the large lumber mills that would soon dominate the town's industry. In anticipation of an increased population and motivated by a desire to become the cultural and recreational capital of the county, a group of citizens organized an athletic association to fund the construction of a gymnasium and auditorium.

By the spring of 1917, the Amateur Athletic Club Association had 500 members, all of whom contributed to the construction of the new gymnasium. The association raised $50,000 and hired Lee A. Thomas of the Portland-based architectural firm Thomas and Mercier to design the building. Construction by Guy H. Wilson began in April 1917 and was completed in March of the following year, with frequent labor donations from Bend citizens.

Before the building officially opened to the public, it was annexed as an auxiliary hospital during the influenza epidemic of 1918. Forty cots were set up in the gymnasium to accommodate those who contracted the flu.

When the club officially opened the building on May 30, 1919, it was dedicated to the veterans of World War I. The main floor doubled as a gymnasium and was the largest auditorium in town, with two balconies that could seat 1,200 people. The second floor had a lounge and a library, with lava rock fireplaces at each end of the building. A heavily padded wrestling room was on the third floor. The basement contained a caretaker's apartment, a bowling alley, a billiard room, 600 lockers, showers, and a 60-foot pool with seating for 100 spectators. The interior color scheme was black and red.

Athletic competitions and town dances were regular occurrences at the club, along with school theatrical productions, lectures by speakers such as Billy Sunday (1919), and meetings for local community groups.

The building's ownership passed to the YMCA in 1919 and to the American Legion in 1921. The Bend School District assumed control in 1923, built Bend High School next door soon afterward, and began using the building as a gymnasium. The Amateur Athletic Club was occasionally commandeered for extra classrooms. Graduating students who studied in the Athletic Club began a tradition of sneaking into the attic (formerly the wrestling room) to scrawl their names on the walls.

Between 1938 and 1939, the school district added a large heating plant to the original structure as a Works Project Administration project. The plant provided heat for the high school and, in time, for nearby Reid and Thompson schools via heat tunnels.

The building fell into disrepair before it was renovated between 1995 and 1998. The pool was covered over, although the steps that served as entrance into the pool still remain, and the bowling alley was removed. The building, which is still owned by the Bend/LaPine School District, reopened in 1999 as the center for the Boys and Girls Club. 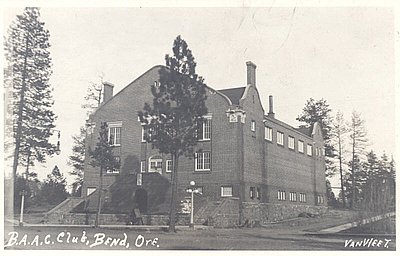 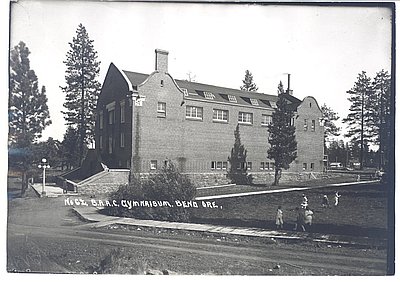