Mary Beatty, one of the first Black women west of the Mississippi to advocate publicly for woman suffrage, attempted to vote in the 1872 presidential election and a year later addressed the organizing convention of the Oregon State Woman Suffrage Association. Known as “Mrs. Beatty (colored),” her full name and identity were lost until recently.

Mary Laurinda Jane Smith was born into a Catholic family in February 1834 near Louisville, Kentucky. Her parents, James Madison Smith and Catharine Ann Philips Smith, were “free persons of color” at the time of their marriage. By 1850, James Smith, a hardware merchant, held real estate valued at $3,000 (the equivalent of over $100,000 in 2020).

On January 8, 1850, with her father’s permission, fifteen-year-old Mary Smith and nineteen-year-old James William Beatty, both free Blacks, were married in Louisville by Bishop Martin John Spalding. The couple, sometimes identified in documents as “Blacks” and sometimes as “Mulattoes,” soon left Kentucky, where restrictions on Blacks increased severely with the state’s third constitution in 1850. The Fugitive Slave Act, also enacted that year, threatened slaves and free Blacks alike.

In their first of many moves, the newlyweds migrated to Hanover, Indiana, living near James’s widowed mother while they farmed and sought more education at a local school. They moved again after Article 13 was added to the Indiana constitution in 1851, denying Black immigration and requiring resident Blacks to register. They left behind their relatives, including Mary’s parents, who settled in Jennings County, Indiana, where her father farmed and became part of the Underground Railroad. The couple probably headed north, possibly into Canada, and eventually moved westward. Records show that they lived in Victoria, Vancouver Island, British Columbia, before arriving in Portland about 1864.

Why the Beattys chose Oregon, with its small Black population, is unclear. The 1860 federal census showed only 128 Blacks and persons of mixed race in Oregon’s total population of 52,465; by 1868–1869, Portland, with a population of about 8,000, reported 41 Black males and 21 Black females. Although not generally enforced, Oregon’s Black Exclusion Laws of 1857 and the Poll Tax of 1862 were clearly discriminatory, yet the Beattys came and succeeded. Early directories list Mary as a “dressmaker” and note that she offers rooms for rent, while James, a “whitewasher” or “kalsominer,” painted a mixture of plaster of Paris and water on walls, fences, and buildings in the first of several small businesses.

Both worked for equal rights, and James headed Portland’s Grand Ratification Jubilee for the Fifteenth Amendment (1870) and argued for hiring Blacks for the Portland police force. He was also active in organizations such as the Colored Lincoln Republican Club. Although Oregon law prohibited Blacks from owning property, the Beattys managed to acquire substantial real estate in their own names; upon her death, Mary’s property alone was valued at over $16,000 (about $490,000 in 2020 dollars).

In the fall of 1871, Mary Beatty probably heard and possibly met Susan B. Anthony during the suffrage leader’s tour of the Pacific Northwest. The next year, Anthony and the National Woman Suffrage Association called on women across the nation to vote in the presidential election. This “New Departure” strategy would test women’s rights as citizens under the Fourteenth Amendment (1868), which provided citizenship to “all persons born or naturalized in the United States,” and the Fifteenth Amendment (1870), which declared the rights of citizens to vote would not be denied or abridged “on account of race, color, or previous condition of servitude.” When Anthony voted in New York, she was arrested and tried, but responses were slightly different in Portland.

On November 5, 1872, Mary Beatty and three white women—Abigail Scott Duniway, Maria P. Hendee, and Mary Ann King Lambert—arrived at Portland’s Morrison Precinct to cast their ballots. Upon questioning, each responded: “I am an American citizen, and have the right to vote.” Their names were written in a separate register and their ballots placed under the deposit box, not to be counted. The New York Times reported on the event, and Duniway announced in The New Northwest: “Well, we’ve been and gone and voted, and Portland yet prospers!”

Three months later, on February 14 and 15, 1873, Mary Beatty participated in the first convention of the Oregon State Woman Suffrage Association, held in Portland’s Oro Fino Hall, at First Street and Stark Avenue. Published minutes show that on the second day, which drew the largest audience, she “read an essay proving that the colored women are awake to their own interests.”

Mary Beatty’s visibility in woman suffrage activities declined when she and James moved in about 1874 to a farm in Cornelius, twenty-three miles from Portland. Although the Beattys remained on the farm for about ten years, Mary continued her association with suffrage friends such as Duniway.

By 1884, the Beattys were back in Portland, where Mary spent the last fifteen years of her life. On Labor Day 1899, while walking with James, she had a falling accident that resulted in a concussion and probable cranial fracture. She died on September 28, at age sixty-five. Her funeral was at St. Joseph’s Church, and interment was at Greenwood Hills Cemetery, where James was also buried after his death on May 5, 1914. The couple had no children.

Although Mary Beatty did not live to celebrate Oregon’s woman suffrage victory in 1912 or ratification of the Nineteenth Amendment in 1920, she was, without a doubt, a courageous Oregon pathbreaker.

“Call for a Woman Suffrage Convention.” The New Northwest, February 14, 1873.

McLagan, Elizabeth. A Peculiar Paradise: A History of Blacks in Oregon, 1788-1940. Portland, Ore.: The Oregon Black History Project and the Georgian Press, 1980. 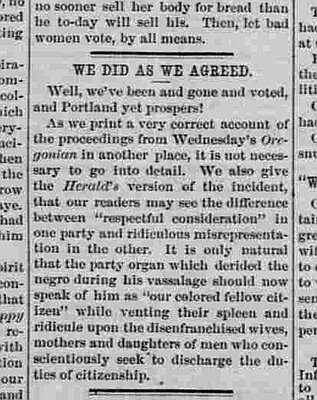 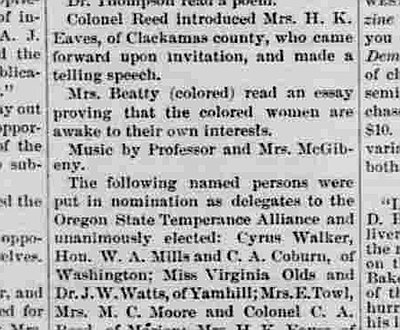