Oregon has over ninety separate streams named Bear Creek (far more, in fact, than the Beaver State has Beaver Creeks). Among the most historically notable is the Bear Creek located in central Jackson County, which flows northwesterly between the Siskiyou Mountains on the west and the Cascade Range on the east to join the Rogue River near Table Rocks.

Sediments, mostly sandstones dating to the Cretaceous Period, once filled the area between the two mountain ranges. Gradual uplift and erosion of those soft sediments created Bear Creek Valley. The richest soils and most extensive farmland occur on the Siskiyou side of the valley, while the adjacent Cascades volcanic deposits result in less workable soils (called "the gumbo" or "the sticky") that, when wet, can add pounds of clay to the bottom of a person's boots.

The most populous part of what many call the Rogue Valley is, in terms of hydrological boundaries, actually the Bear Creek Valley—the site of Medford, Ashland, Jacksonville, Central Point, Phoenix, and Talent. Because of its frequent turbidity, the local Takelma Indians referred to the creek as Si'kuptpat (‘muddy water’). The Shasta, who occupied the southern part of the valley, called the stream Ussoho (the meaning of the name is unknown). Bear Creek supported heavy runs of salmon and steelhead, which both humans and grizzly bears feasted on.

Occupying over a hundred square miles of relatively gentle terrain, much of it with fertile soils, the Bear Creek Valley attracted emigrants bound to the Willamette Valley during the 1840s and 1850s. After a skirmish with the Upland Takelma near the Rogue River in 1851, U.S. Army troops named the stream Stewart's (or Stuart's) River for an officer who was buried near its banks. Later that decade, a near-fatal encounter between a settler and a grizzly bear among the creek's alders and cottonwoods resulted in the permanent name.

Passage of the Oregon Donation Land Act in 1850, along with the 1851-1852 expansion of gold strikes from northern California into southwestern Oregon, brought about the first permanent EuroAmerican presence in the Bear Creek Valley. An 1853 treaty with the Rogue River (Takelma) Indians opened the valley to extensive settlement. Much of the Bear Creek Valley was blanketed with Donation Land claims before 1860. Irrigation ditches drew water from Bear Creek, but its low-gradient streambed discouraged both large ditches and water-powered mills; steeper-gradient tributaries, such as Ashland Creek, Wagner Creek, and Griffin Creek, were more conducive to such uses.

After the 1856 defeat and near-total removal of the area's Native peoples, Bear Creek Valley grew into southwestern Oregon's wealthiest locale, and by 1887 the Southern Pacific Railroad followed its entire length. After 1900, due to intense commercial boosterism and large-scale irrigation developments, the valley's grain farming and cattle ranching rapidly gave way to fruit orchards and a densely populated rural landscape centered on the railroad town of Medford. During Medford's early years, the city drew its drinking water directly from Bear Creek.

Following World War II, the population of Bear Creek Valley exploded; by 2015, almost 150,000 people lived in the valley. As a relatively confined area, where many residents appreciate its fast-disappearing rural qualities, Bear Creek Valley has been subject to special land-use planning efforts and to the attentions of the Rogue Valley Council of Governments (RVCOG).

Much of Bear Creek's length has been channelized and is now lined with mobile home parks, garden-apartment complexes, tract-home subdivisions, and other developments. The popular Bear Creek Greenway—a twenty-one-mile-long walking and bike-riding path, largely within the creek's riparian zone, that extends from Central Point to Ashland—preserves a semblance of what was once enjoyed by early Jackson County residents. Channel barriers have been removed to improve the habitat for Bear Creek's slowly recovering runs of anadromous fish. 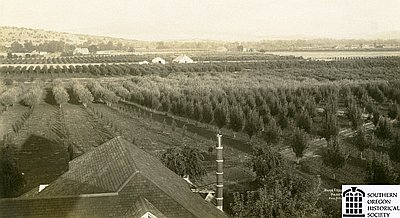 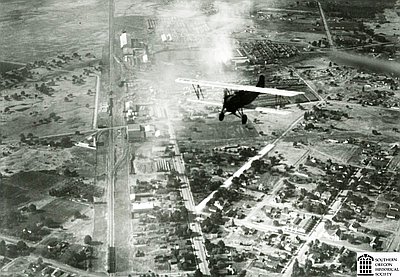 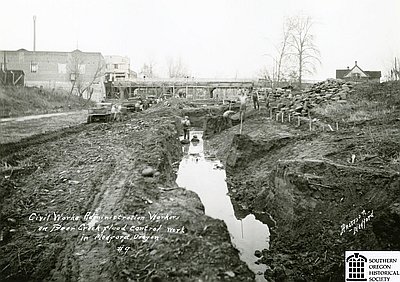 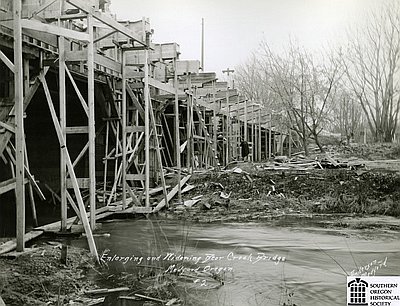 The 1853 Council of Table Rock negotiated a peace treaty between representatives of the American government and the Takelma, Shasta, and Dakubetede Indians of the Rogue Valley, bringing a temporary respite to the ongoing conflict in southwestern Oregon between Native people and the ever-growing number of White settlers and miners. …

The Table Rocks, two large mesas north of Medford, rise nearly 800 feet from the north side of the Rogue River, opposite where Little Butte Creek and Bear Creek join the river from the south. Lower Table Rock is the downstream, westernmost mesa, while Upper Table Rock is upstream and to …

Once called Wagner Creek, Talent is located in southwestern Oregon between Ashland and Medford. Situated near the confluences of Wagner and Anderson Creeks with Bear Creek, the town sits astride important travel routes, including the California Trail, the Applegate Trail, the California-Oregon stage road, the Southern Pacific Railroad, the Old …