Built when racing was popular among passenger steamboats, the stately Bailey Gatzert was a contender. It was one of the most famous Columbia River excursion boats and was commemorated with a song and a stamp.

In 1904, The Dalles, Portland & Astoria Navigation Company (the “Regulator Line”) bought the Bailey Gatzert. During the 1905 Lewis and Clark Exposition, it made twice-daily runs from Portland to Cascade Locks and was honored with a song, “The Bailey Gatzert March.”

Steamboat racing was common on the Columbia River, and the Bailey Gatzert was fast—making it from The Dalles to Portland in a little over five hours. While passengers and shore viewers reportedly enjoyed the competition, common (but unverifed) legend has it that the Bailey Gatzert was called the “Daily Bastard” by those hit by its large wakes.

In 1907, owners rebuilt the boat with a larger hull (878 tons and 194.3 feet long) and engines. It also acquired a five-chimed whistle from the steamer Telephone.

The Spokane, Portland & Seattle Railroad bought the Regulator Line, including the Bailey Gatzert, in 1915, but declining passenger sales resulted in the sale, in 1918, to the Puget Sound Navigation Company. The company moved the steamer back to the Puget Sound and added a car elevator, transforming the Bailey Gatzert into a car ferry. In 1926, the company retired the steamer and removed its machinery. What remained became a floating machine shop on Seattle’s Lake Union.

The Bailey Gatzert’s whistle, name board, and pilot wheel are on permanent display at the Columbia Gorge Interpretive Center Museum in Stevenson, Washington. In 1996, the U.S. Postal Service issued a Bailey Gatzert stamp. 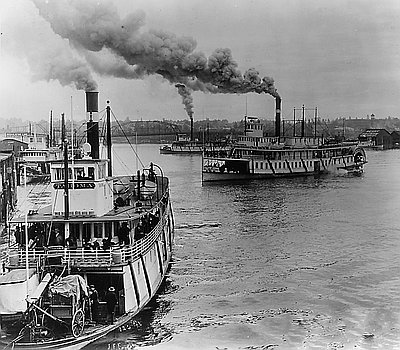 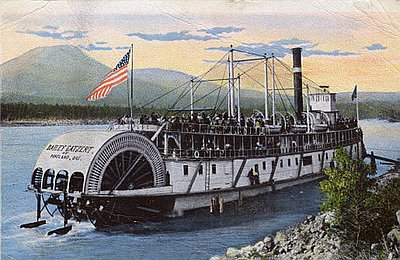 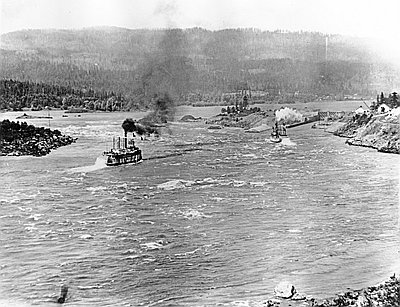 Timmen, Fritz. Blow for the Landing: A Hundred Years of Steam Navigation on the Waters of the West. Caldwell: The Caxton Printers, Ltd, 1973.

A massive ground movement known as the Bonneville Landslide, which occurred about 1200 AD, briefly blocked the Columbia River. The river subsequently broke through the obstruction, and the uneroded portions of the landslide created the rapids known as the Cascades of the Columbia.  Native peoples settled along this portion of the Columbia …