Oregon poet and publisher Vi Gale was born Viola Håkansson in rural Noret along the Västerdal River in central Sweden. In 1923, the last year of major Swedish immigration to the United States, her family came through Ellis Island, where their name was changed to Hokenson. They settled in Clatskanie, Oregon, where Gale's father found work in the Simon Benson logging camp, "Swedetown." After her 1934 high school graduation, Vi Gale was the Clatskanie city librarian for many years. In 1940, she became a U.S. citizen and moved to Portland, where she took college courses and married Jim Gale in 1942.

After World War II, Gale found work writing product promotions and gradually began to write short stories and poems. Her poetry was noticed in literary magazines by the legendary Denver publisher Alan Swallow, who brought out her first book, Several Houses, in 1959.

Gale's poems often originate in personal experiences and memories. A few contain Scandinavian recollections, and many demonstrate a keen sense of place. Though she never considered herself a Beat poet, she said she was greatly encouraged by the opening up of American poetry by the Beats, who used confessional forms to protest the conformity and conservatism of the 1950s. Over time, the slightly formal feel of the strict stanzaic patterns in her early work grew more relaxed and experimental. During the 1960s, she also connected with contemporary Swedish poetry, which she was able to read in the original language. For many years, she taught creative writing at the YWCA in Portland and around the state.

In 1974, Vi Gale started a small Portland publishing house named Prescott Street Press after the street on which she lived for half a century. The press, initially supported by National Endowment for the Arts grants (and later by Jim Gale), launched new and acclaimed poets from the Northwest, Japan, and Sweden. Designed in collaboration with John Laursen, Prescott Street Press books and poetry note cards often included the work of visual artists. The press had national distribution, and its books were exhibited at the Small Press Center in New York City.

Gale considered nurturing other writers "a labor of love." For more than thirty years, she published more than seventy local and international poets and nine visual artists and helped launch several writing careers. Floating the River in Melancholy, by Shuntaro Tanikawa, won an American Book Award and Making It Home, by Lars Nordström, received an Oregon Book Award. Gale was honored with the C.E.S. Wood Retrospective Award by the Oregon Institute of Literary Arts in 1989.

Gale died in 2007, having lived her entire adult life in Oregon. She never returned to Sweden. 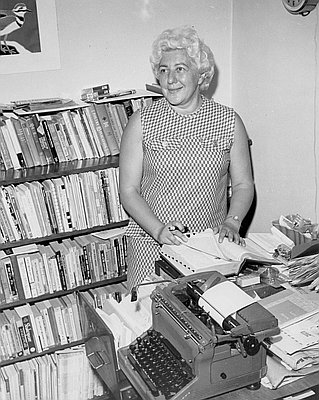