York was William Clark's slave and an integral member of the Lewis and Clark Expedition, sent by President Thomas Jefferson to explore the Louisiana Territory and the Oregon Country in 1804-1806.

The written descriptions of York portray him as large, dark, strong, and agile. His date of birth is unknown, but his parents were owned by William Clark's father, and as a young child York had been assigned as the companion and later manservant to Clark. In the traditions of Southern slavery, that usually meant they were of about the same age, which means that York was probably born in about 1770.

Journal entries and Native American oral traditions note that Native people were impressed by York and that his presence operated as a valuable element in the expedition's diplomatic interactions with the Indians they encountered. On October 9, 1804, expedition member Sgt. John Ordway recorded in his journal: "the greatest curiousity to them was York Capt. Clark's Black man. all the nation made a great deal of him." York's contributions also included hunting, medical services, physical labor, and participation in special exploratory activities. During the difficult days of the return trip, when expedition members were near starvation, York was entrusted with the critical task of trading their few remaining valuables with the Natives for desperately needed provisions, ensuring the expedition's survival.

Literary and academic treatments of York subsequent to the expedition downplayed and distorted his indispensable contributions. Negative racial stereotypes used to legitimize Black slavery and oppression were often attached to the York story. In this tradition, he was often cast as a "Sambo" figure, who loved slavery, spoke a heavy dialect, and was obsessed with sex. Conversely, during the Civil Rights era, writers seeking positive role models in a changing racial environment distorted York into a "superhero" of the expedition, serving as guide and interpreter and saving Clark's life. Neither depiction is accurate or supported by fact.

Post-expedition accounts tell of York becoming increasingly bitter and resentful, chaffing in his return to the limitations of traditional slave status after his liberating experiences in the West. Clark, in response, resorted to the standard arsenal of slave-master controls prevailing in that era. At various times Clark "trounced" (beat) York, had York jailed, and hired him out to a "sever" master to break his spirit, according to a collection of letters Clark wrote to his older brother. The letters were discovered among Clark family papers in the 1980s and are now contained in Dear Brother, edited by James J. Holmberg.

Clark eventually granted York his freedom in about 1816, approximately ten years after the expedition's return to St. Louis. York's final fate is clouded in mystery. One version, offered by Clark, claims that York grew to hate his freedom and died in Tennessee while trying to return to his old master. Another version, based on a description by an 1830s mountain man named Zenas Leonard, has York living out an honored life as a Crow Indian chief in the West. There is no conclusive evidence to support either version. 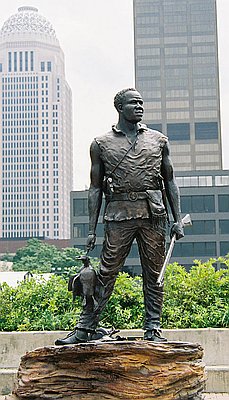 York
Statue of William Clark's slave York, a member of the Lewis and Clark Expedition of 1804-1806. The statue is installed in Louisville, Kentucky.

Patrick Gass was one of the early enlistees in the expeditionary force led by Captains Meriwether Lewis and William Clark to survey the Missouri and Columbia Rivers in 1804-1806. In addition to his participation in the great journey, Gass was the author of the first published account of the expedition. …

Sacagawea was a member of the Agaideka (Lemhi) Shoshone, who lived in the upper Salmon River Basin in present-day Idaho. In about 1800, she was kidnapped by members of the Hidatsa tribe and taken to their homeland in the Knife River Valley, near present-day Stanton, North Dakota. A few years …