Toussaint Charbonneau played a brief role in Oregon’s past as part of the Corps of Discovery, the historic expedition led by Meriwether Lewis and William Clark in 1804-1806. He is one of the most recognizable among members of the Corps of Discovery, principally as the husband of Sacagawea and father of Jean-Baptiste Charbonneau, the infant who accompanied the expedition. The captains hired Charbonneau as an interpreter on April 7, 1805, at Fort Mandan in present-day North Dakota and severed his employment on August 17, 1806, on their return journey.

Charbonneau was born on March 22, 1767, in Boucherville, Quebec, a present-day suburb of Montreal, to parents Jean-Baptiste Charbonneau and Marguerite Deniau. In his youth, he worked for the North West Company, and by the time Lewis and Clark encountered him in late 1804, he was an independent trader living at a Minnetaree village on the Knife River, a tributary to the Missouri near present-day Stanton, North Dakota. Charbonneau lived in the village with his Shoshoni wife Sacagawea, who had been captured by Hidatsas in present-day Idaho four years earlier and may have been sold to Charbonneau as a slave.

On November 4, William Clark wrote in his journal that “a Mr. Chaubonée [Charbonneau], interpreter for the Gros Ventre nation Came to See us…this man wished to hire as an interpreter.” Lewis and Clark made a contract with him, but not with Sacagawea, although it is clear that the captains saw Sacagawea’s great benefit to the expedition, because she could aid them when they traveled through her former homeland.

Although the captains relied on Charbonneau’s skills as an interpreter, he incurred their displeasure on several occasions. On the Missouri west of Fort Mandan, for example, he nearly capsized a pirogue filled with the expedition’s instruments, prompting Lewis to record in the Journals on May 14, 1805, that Charbonneau “cannot swim and is perhaps the most timid waterman in the world.” On August 14, Clark noted his reprimand of Charbonneau for his treatment of Sacagawea: “We encamped on the Lard side near place the river [Rattlesnake Creek] passes thro’ the mountain [near present-day Dillon, Montana]. I checked our interpreter [Charbonneau] for Strikeing his woman at their Dinner.”

By the conclusion of the expedition, however, the captains registered strikingly different evaluations of Charbonneau. Clark wrote to Charbonneau on August 20, 1806: “You have been a long time with me and have conducted our Self in such a manner as to gain my friendship….Charbono, if you wish to live with the white people, and will come to me I will give you a piece of land and furnish you with horses cows & hogs.” Lewis counted him “a man of no peculiar merit; was useful as an interpreter only, in which capacity he discharged his duties with good faith.”

In the Oregon Country, where Native languages were very different from Charbonneau’s experience, he shared interpreter duties with George Drouillard, mostly during trading exchanges with Columbia River and coastal people. When the expedition encountered the Flathead Indians in present-day Montana, however, Charbonneau facilitated an important exchange, as Lewis explained: “Our conv. With the Tushepaws [Flathead] was held thro’ a boy whom we found among them; a boy a Snake [Shoshoni] by birth….I spoke English to Labieche [Corps member]—he translated it to Chaboneau in French—he to his wife [Sacagawea] in Minnetaree—she in Shoshone to the boy—the boy in Tushepaw to that nation.”

At Fort Clatsop, Charbonneau, Sacagawea, and their son occupied a room next to Lewis and Clark. The captains instructed Charbonneau to aid expedition sergeants in expelling Indian guests at the fort each night at sundown and securing a locked gate until sunrise. On the return to St. Louis, Charbonneau aided in the captains’ continual efforts to purchase horses from Columbia River tribes, but with little success. Once over the Continental Divide, he accompanied Clark and the main expedition force down the Yellowstone River on the route back to Fort Mandan, where he left the expedition. His severance pay was $409.16, considerably more than most men on the expedition received but less than half of the pay accorded George Drouillard, hunter and interpreter.

Charbonneau lived to his mid-seventies, serving as guide and interpreter for fur companies on the upper Missouri River. Sacagawea died in 1812, and he married at least twice more before he died, the last time in 1838. We do not know precisely when he died, but it was sometime between August 26, 1839, the last-mentioned documentation of Charbonneau when he left Fort Mandan, and August 14, 1843, when his son Jean-Baptiste received $300 from his father's estate. 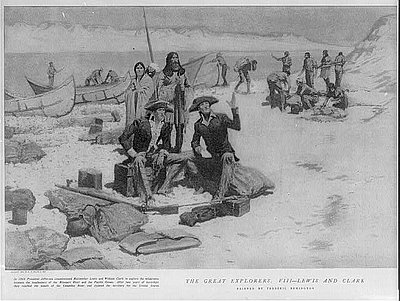 Ronda, James. Lewis and Clark Among the Indians. Lincoln: University of Nebraska Press, 1984.

Sacagawea was a member of the Agaideka (Lemhi) Shoshone, who lived in the upper Salmon River Basin in present-day Idaho. In about 1800, she was kidnapped by members of the Hidatsa tribe and taken to their homeland in the Knife River Valley, near present-day Stanton, North Dakota. A few years …

York was William Clark's slave and an integral member of the Lewis and Clark Expedition, sent by President Thomas Jefferson to explore the Louisiana Territory and the Oregon Country in 1804-1806.

The written descriptions of York portray him as large, dark, strong, and agile. His date of birth is unknown, …