The first house built by non-Natives In Oregon Country that was intended to be permanent was built on the south shore of the Columbia River in June 1810. Nathan Winship of Boston warped his ship, the Albatross, forty miles up the river to Oak Point, a few miles northeast of present-day Clatskanie. Seeing the flat land among the oaks, he set his crew to building a log house.

Winship's objectives were to harvest the abundant furs to be had in the area, to grow crops in the green and fertile valley, and to get ahead of the Russians, who had previously attempted to enter the Columbia. He and his brothers—Jonathan (who had already traded with the Russians) and Abiel—were determined to extend their family avocation of horticulture to the shores of the Columbia.

The Oak Point settlement had been planned two years before in Brighton, Massachusetts, not far from Boston, in the office of Abiel Winship, the oldest of the Winship brothers. The post was to be an "agricultural base and from there to enlarge the coastal trade." Jonathan Winship also "hoped to have planted a Garden of Eden on these shores of the Pacific and made that wilderness to blossom like the rose." (When Portland was established several miles upriver in 1851, slips from Winship's rose garden would find their way into the town's gardens.)

By early June 1810, the timbers on the house reached ten feet high. The Albatross crew offloaded hogs and goats, began turning up the ground, and planted vegetable seeds. But on the morning of June 8, after a heavy rain, they were surprised as two feet of water from the Columbia's spring flood washed over their new settlement. With the timbers uprooted, the ship's officers selected a new site for the post on higher ground one-quarter mile downstream.

Canoes bearing Chinook and Chehalis Indians arrived from downstream in the second week of June. In establishing their new trading post forty miles up the Columbia, the Winships had interposed themselves, perhaps unknowingly, along the Natives' centuries-old river trade route. The Indians aimed musket fire into the settlement, and a few of the men came alongside the Albatross, shouting to the officers on deck. They made it clear that they did not want their trade injured and that the ship should return downriver. Captain Winship and his veteran chief mate, William Smith, saw wisdom in the Natives' demand and sailed back down the river.

The Winships' was the first effort to build an American post in the Pacific Northwest.  Both they—and John Jacob Astor, whose ship the Tonquin would arrive the next year—foresaw the long Columbia valley as a vibrant highway for commerce between the inland seaports on the coast and the nations of the Pacific rim. 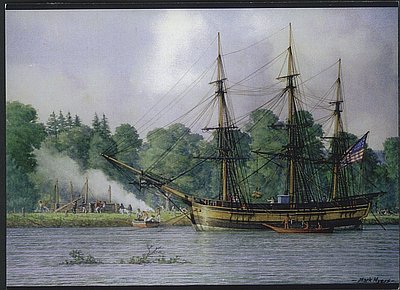