Known as Father Wilbur, the energetic and determined Rev. James Harvey Wilbur was a leader in Oregon’s early Methodist community. He established a number of Methodist institutions in Oregon and later moved to the Yakama Indian Reservation, where he spent twenty years as missionary and Indian agent.

Contemporaries described Wilbur in larger-than-life stories as an imposing man with considerable Christian zeal and a strong work ethic, possessing both physical strength and a sternly paternalistic attitude. He was a large man, reportedly 6'4'' and, in later life, weighed more than 300 pounds.

Wilbur arrived in Oregon in 1847 after a nine-month sea journey from New York with his wife Lucretia Ann Stevens, daughter Elizabeth, and the Methodist Episcopal Oregon Mission superintendent, William Roberts, and his wife Hannah. Wilbur and Roberts joined the Methodist Mission, which Rev. Jason Lee had established in 1834 in the Willamette Valley. The mission, which largely failed in its efforts to attract Native American students and converts, had turned to serving a rapidly growing white settler population.

Wilbur quickly became integral to the local Methodist church district, which had about 320 members in 1848. He oversaw education at the Oregon Institute, a Methodist school in Salem that later became Willamette University, and served as an itinerant preacher, traveling by horseback to remote communities for religious revivals.

In Portland, he was the first minister of the Taylor Street Methodist Episcopal Church. In 1850, he built a simple wood-framed church for the congregation, reportedly doing much of the physical labor himself. He also oversaw construction of the Portland Academy and Female Seminary, the first school in the city to offer elementary and secondary education.

When the Methodists established a district in the Umpqua Valley in about 1853, Wilbur was named the presiding elder; he built a church and school, the Umpqua Academy. He returned to the Willamette Valley in 1857 as presiding elder of the district and joined the Oregon Methodist Episcopal Conference's committee on Indians. His interest in working among Native people grew at a time when many of his colleagues believed that Native Americans were a dying race, incapable of religious conversion.

In 1860, Wilbur and his wife moved to the Yakama Reservation, in southwest Washington Territory, where he was a church elder and teacher. Within a few years, he became the reservation’s agent, and for the next twenty years he doggedly pursued a plan to “civilize” and Christianize members of the fourteen confederated tribes of the Yakama Nation, who mostly resisted his efforts.   In keeping with contemporary attitudes, Wilbur was dismissive of traditional Native culture. He treated Indians like children who needed lessons of the “bible and the plow”—Christianity, education, and physical work—in order to “wake up from the night of sin to the Gospel day and glorious hopes of a future bliss.”

Wilbur favored Methodist converts with houses, jobs, and federally issued goods, and he was reprimanded for not equitably distributing the treaty-mandated goods. He intimidated Catholic Indians, barring their priests from the reservation, and he jailed leaders of the native Dreamer religion. Wilbur also tried to eradicate seasonal migrations, gambling, polygamy, and traditional dress.

Despite his attacks on the Native lifestyle, Wilbur supported his "Christian Indians." He promoted Yakamas as Methodist ministers, arrested and ran off liquor peddlers, and defended Yakama land from encroaching Euro-American ranchers. 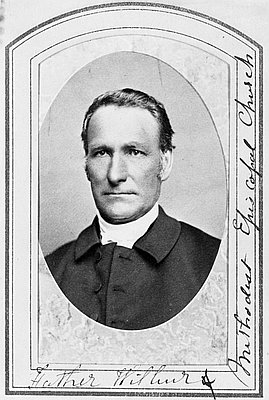