Warrior Point, on the north end of Sauvie Island in the Columbia River about fifteen river miles downstream from the mouth of the Willamette River, is an understandably misnamed place. On October 28, 1792, a British exploration party paddling up the Columbia in the ship’s launch and cutter boats encountered twenty-three canoes with about two hundred Chinookans aboard, most of them wearing armored vests and holding weapons. Lt. William Broughton, captain of the HMS Chatham, the tender vessel for George Vancouver’s HMS Discovery, led the British force. Seeing his men clearly outnumbered, Broughton ordered the launch’s swivel gun loaded and primed for discharge. He loaded his own musket and fired a ball in the water to forewarn and frighten the Chinook. While the only violence during the encounter came from the British mariners, the place-name Broughton affixed to the place—Point Warrior—represents his characterization of the Native canoe men.

The canoes likely came from Cathlapotle, a large village on the eastbank side of the Columbia River (in present-day Washington) that had been occupied since at least 1450. In 1792, the population of Cathlapotle was likely a thousand or more in a village of about fourteen houses that Meriwether Lewis and William Clark would count on their descent of the Columbia in November 1805. Cathlapotle residents sustained themselves by fishing the Columbia and tributary streams for salmonids, suckers, eulachon, sticklebacks, and other species, and they conducted trade up and down the river.

Although Cathlapotle Chinook probably had some European manufactured goods by 1792, they had not had direct contact with whites or encountered firearms until Broughton’s boats came upriver. The Chinook evidently launched their canoes into the river prepared for conflict when they first spotted Broughton and his two longboats. John Sheriff, Broughton’s master mate, wrote in his log that the Natives appeared to have “intention to attack us & drive us down the River again.” The Chatham’s clerk, Edward Bell, described the tension: “the Swivel was primed, and a Match kept burning, all the Muskets & Pistols in the two Boats were loaded with Ball,” but seeing “that our intentions were as peacable, as their own, they took off all their War Garments, and every man seem’d eager to dispose of his Bows and Arrows for old Buttons, Beads, etc.” The men’s armor, double-thick elk hide that could stop an arrow (clamons), was worn over their shoulders to cover their torsos. The weapons that they willingly traded for goods were bows and arrows, but they would not trade Native copper swords or iron axes. Copper and iron were too important for exchange.

Broughton left Warrior Point and continued his voyage upriver, halting at Point Vancouver, near present-day Washougal, Washington, before heading downriver to the Chatham. Warrior Point became known to a broader world in 1798, when Vancouver’s Voyage of Discovery was published and included Broughton’s map of the Columbia River. 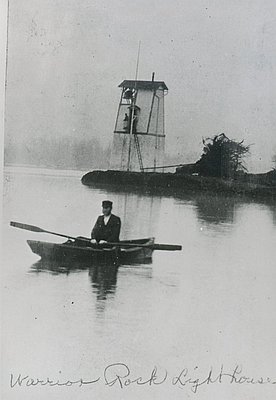 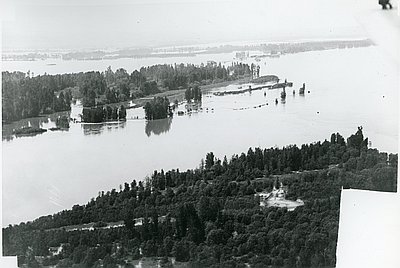 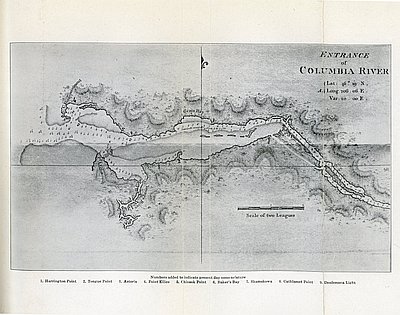 Cathlapotle is the archaeological site of a major Chinookan town located in the Portland-Vancouver metropolitan area, at the place where Lake River, Gee Creek, the Lewis River, and the Multnomah Channel join the Columbia near Ridgefield, Washington. It was founded in its current location at about AD 1450. Of the …

"Multnomah" is a word familiar to Oregonians as the name of a county and a waterfall, among other places. Less well known is its origin as the name of an Indian village once located on the upriver end of Sauvie Island facing the Columbia River. The name is from Chinookan …

During the early nineteenth century, upwards of thirty Native American villages were documented in the Portland Basin (present-day Multnomah, Clark, Clackamas, and east Columbia Counties). Most of the villages were sited on riverbanks and in wetlands along the Columbia and Willamette Rivers and were occupied by people who spoke dialects of a …

Lewis and Clark called them the "Wappato Indians," the people who inhabited the villages that lined the riverbanks in the "Wappato Valley," the resource-rich lowlands along the Columbia River between Vancouver and Kalama, centering on Sauvie Island. "Wappato" was a reference to wapato (Sagittaria latifolia), a tuber found …