Voodoo Doughnut is an independently owned business in Portland and Eugene known for its off-kilter concoctions and unusual business philosophies. Owners Kenneth “Cat Daddy” Pogson and Tres Shannon opened the flagship store in 2003 on Southwest Third Avenue in Old Town Portland. A second store, Voodoo Doughnut Too, is located on Northeast Davis Street (opened in June 2008), and Voodoo Doughnut Tres opened in Eugene on East Broadway in June 2010. A fourth store opened in Denver, Colorado, in 2013.

Friends Pogson and Shannon were well-known personalities in the downtown Portland music and bar scene during the 1990s. Until 1994, Shannon owned the X-Ray Cafe, an all-ages music venue on West Burnside that promoted the counterculture movement. Although Voodoo Doughnut has since become part of the popular culture in Oregon, Shannon and Pogson opened the shop as an alternative to standard doughnut fare, bringing to the business the same countercultural spirit that made the X-Ray iconic.

The original store is located in Portland’s old Skid Row near West Burnside, flanked by homeless shelters, late-night live-music venues, and an adult movie theater. From the start, the shop was open all night, attracting bar-goers after last call who lined up on Third Street to buy doughnuts with names like the Voodoo Doll, the Dirt Doughnut, and the Old Dirty Bastard. Pogson and Shannon, having taken a crash-course in doughnut-making in southern California, experimented with ingredients such as breakfast cereal, Tang, bacon, peanut butter, and crushed Tums. The city health inspectors stopped the sale of Voodoo products containing over-the-counter medications.

Voodoo’s unusual fare has caught the attention of national media, including the Travel Channel, Top Chef, Rachael Ray, Good Morning America, the Today Show, ESPN, and the reality show The Amazing Race. Notably, Voodoo earned press when it constructed a huge pink box filled with 3,880 doughnuts weighing 666 pounds for the Portland Bridge Festival in August 2011. Then-mayor Sam Adams proclaimed it the "world’s biggest box of doughnuts”—later confirmed by the Guinness Book of World Records. That same year, Voodoo partnered with Rogue Ales to turn its most popular doughnuts into bottled beer; Bacon Maple Ale and Chocolate, Peanut Butter, & Banana Ale (from the Voodoo’s Memphis Mafia doughnut, a tribute to Elvis) are for sale at pubs throughout Oregon.

The company’s slogan is "The Magic is in the Hole,” and its logo features a version of Baron Samedi, Voodoo Loa of the dead. The cooking oil the shop uses is referred to by Shannon and Pogson as "Voodoo oil." In order to ritualize the spirit behind the name “Voodoo,” Pogson and Shannon became ordained ministers in the Universal Life Church and perform weddings, both “real” and “fake,” in their stores. 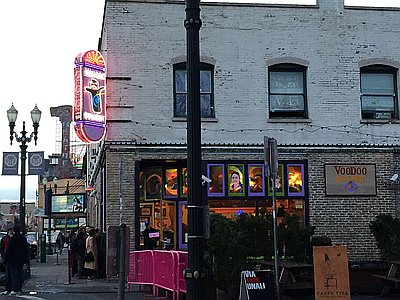