On April 7, 1922, four years after the armistice ended World War I, an emotional crowd packed into The Dalles Civic Auditorium and Veterans Memorial to dedicate the new three-story building. They were gathered to honor Wasco County’s nearly three thousand veterans, including members of the highly decorated 41st Infantry Division, known as the Sunset Division. Surrounded by flowers and floodlights, a forty-eight-piece military band played, politicians spoke, and the crowd joined in a round of patriotic songs. The celebration lasted late into the evening, with couples dancing across the maple-floor ballroom to popular songs played by a ten-piece orchestra.

The Dalles Civic Auditorium and Veterans Memorial, located near the heart of downtown The Dalles, was designed by Portland architects Chester Houghtaling and Leigh Dougan, whose partnership from 1914 to 1925 included the Benton Hotel in Corvallis, the Elks Temple and Medical Arts Building in Portland, and the Old First National Bank Building in Salem.

The neo-classic structure featured a regulation-sized, steel-roof beamed gymnasium. There were also two community meeting rooms with space for 250 guests; an ornate, 6,000 square-foot ballroom with suspended dance floor; a small kitchen; a meeting room with a stone fireplace called the Fireside Room; and a 1,000-seat theater designed for both stage productions and movies. The auditorium included an orchestra pit, a huge fly loft for scenery, and a roomy balcony.

Much of the wooden interior of the building was handcrafted by local artisans. The buff-colored brick exterior was trimmed in limestone, with a corner brass plaque announcing, "Erected in Honor of the World War veterans of The Dalles and Wasco County."

Through much of the 1930s and 1940s, the Civic was the county’s primary cultural venue, hosting concerts, dances, theater productions, movies, graduations, community meetings, and weddings. The city’s Parks and Recreation Department took over operations in the 1950s and added athletic and fitness programs. By the late 1960s, however, bookings and attendance had dropped, with the only sizable crowds attending professional wrestling.

The Civic was placed on the National Register of Historic Places in 1978, part of the downtown historic district along with the library, the courthouse, and the post office. By 1992, the building had fallen into such disrepair that the city sold it for one dollar to the Civic Auditorium Historic Preservation Committee, which developed plans to restore the building. Using grants, urban renewal funds, donations, and volunteers, the organization slowly refurbished the building until, twenty years later, the ballroom and gymnasium were once again hosting concerts, weddings, festivals, proms, religious services, and community meetings. 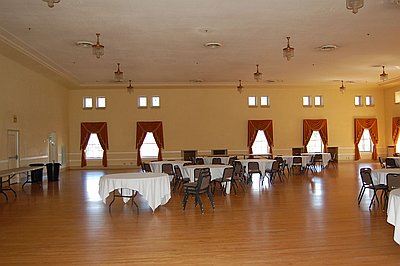 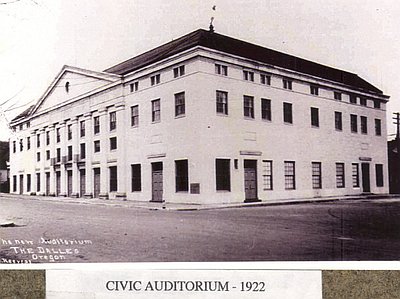 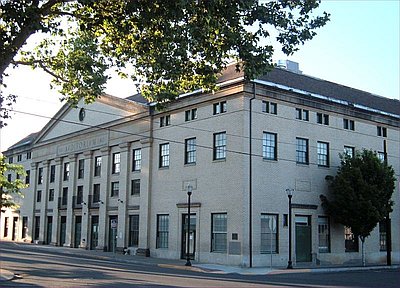 The 41st Division of the Army National Guard was organized on July 18, 1917, at Camp Greene, North Carolina, under the command of Major General Hunter Liggett. The division was composed of recently federalized National Guard troops from the Northwest and Midwest, including the Oregon National Guard's Third Infantry Regiment. These National …

The Dalles is one of the oldest permanently occupied places in Oregon, significant to Native people for over ten millennia and to Euro-American settlers since the 1830s. The city, the largest in Wasco County, is located on a bend of the Columbia River at the east end of the Columbia …