Sugar pine (Pinus lambertiana) is one of the great conifers of the western United States, if not the world, in stature (the largest of the pine genus) and usefulness. Early botanist David Douglas named the sugar pine in 1827 to honor British pine expert Aylmer Bourke Lambert (1761-1842). Its common name refers to the sweet, resinous sap it exudes from bark wounds.

Sugar pines grow along the west slope of the Cascade Mountains from the north-central Cascades of Oregon, south through the Siskiyou, Klamath, and Sierra Nevada mountains, to an isolated population in the mountains of Baja California Norte, Mexico.

Sugar pine grows in dry-to-moist mixed conifer forests from 1,100 to 10,000 feet elevation, depending on latitude—lower to the north, higher to the south. Large, individual trees usually grow in isolation scattered about the landscape. Because wildfires are largely suppressed, these giants are weakened by competition from smaller trees normally consumed by low to moderate wildfire. They are then vulnerable to white pine blister rust and attack by the native mountain pine beetle.

Historically, sugar pine grew to enormous size as the largest species in its genus. The Oregon champion in Josephine County is 217 feet tall and almost 6.5 feet in diameter. The largest known sugar pine in the world (209 feet tall and nearly 11.5 feet in diameter) is near Dorrington, California. Trees may reach an age of 400 years. Not only are the trees the tallest of the pines, their cones are the longest and may reach a length of more than 20 inches. As David Douglas wrote, the cones looked "like sugar-loaves in a grocer's shop" dangling from branch tips high above the ground.

Native Americans used the sugar pine's large, nutritious seeds for food and its sweet sap as a treat. It was also used as a remedy to treat stomach gas, loosen the bowels, or—mixed with milk—as drops for sore eyes. The "nuts" (seeds) were used as beads in jewelry. The sugar alcohol, pinitol, the sweet in sugar pine, is under investigation for possible insulin sensitizing and muscle-building properties. Soybeans are the modern commercial source.

Early European settlers discovered the value of sugar pine as a timber tree—enormous volume and light, straight-grained, knotless, easily worked wood that has no taste or scent. Many of the uses to which they put sugar pine are considered wasteful, such as making hand-hewed shakes and shingles, leaving huge trees—half used—to rot where dropped, or dropping large trees end to end to make livestock corrals and other enclosures.

Huge logs, once felled, were moved by immense wheeled contraptions to trains or trucks for transport to mills. Sometimes the mill was brought to the tree. It is not uncommon to see a huge stump with a pile of large decaying branches some distance away, evidence that a sugar pine was felled and milled on the spot, with sawn lumber hauled away, boards at a time. 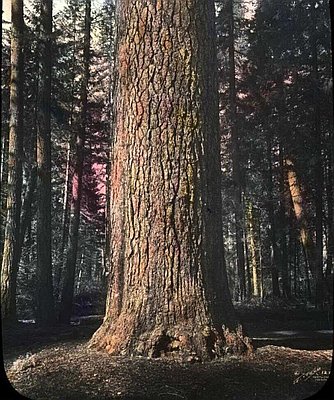 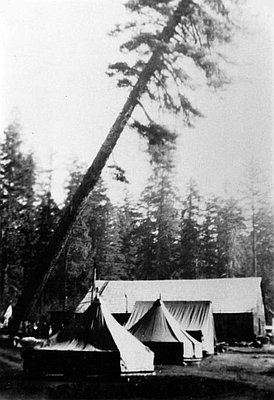