The enactment of Senate Bill 10 in 1969 was a crucial step on the path to Oregon’s landmark Senate Bill 100, passed in 1973, and the adoption of the goals that are the heart of the state’s land-use planning program.

Oregon was the second state in the nation, after California, to mandate local government plan-making. SB 10’s requirement that local governments also zone all the land within their jurisdictions —California did not mandate zoning—was a first in the United States. Prior to 1969, Oregon had enabled local governments to plan and zone, but doing so remained a local choice. The statutory appearance of statewide land-use planning goals in SB 10 was unprecedented, as was the stipulation of a deadline and the authorization for the state to take on what had always been a local prerogative if a local government failed to comply.

SB 10 required all Oregon cities and counties to adopt comprehensive land-use plans and zoning ordinances to implement those plans by the end of 1971. If a local government failed to comply with the state mandate, then the governor had the authority to plan and zone for that jurisdiction. The governor could choose to grant an extension if a jurisdiction was able to demonstrate that satisfactory progress was being made. If the governor decided to take over planning and zoning for a jurisdiction, then SB 10 provided ten generally worded goals to guide that process.

SB 10 originated in the Legislative Interim Agriculture Committee. Ted Sidor, a staff member for the Oregon State University Extension Service, presented evidence that the urbanization of farmland, especially in the Willamette Valley, posed a threat to agriculture, the state’s second-largest industry. Sprawling development was also increasing the costs to local governments to supply infrastructure for new homes and businesses. Sidor’s analyses helped persuade the Interim Committee to prepare a package of legislation that included SB 10, which the politically powerful Senate Agriculture Committee sponsored during the 1969 session. Wes Kvarsten, the executive director of the Mid-Willamette Valley Council of Governments, led a group of professional planners who wrote the statewide planning goals that were incorporated into the bill. Governor Tom McCall strongly supported SB 10.

While SB 10 didn’t generate much controversy during the legislative session, rural property owners and elected officials who opposed mandatory zoning challenged the law with a measure on the 1970 ballot. The law survived the measure, but many local governments resisted implementation. The absence of state financial support to implement the law contributed to the resistance and to slow progress, even in those cases where local governments wanted to comply.

About 42 percent of Oregon cities and about 30 percent of Oregon counties adopted both plans and zoning ordinances by the end of 1971, as required. Governor McCall reluctantly granted extensions whenever asked, knowing that it was politically and financially impractical for the Governor’s Office to take over planning and zoning. Land-use planning advocates were concerned, however, that as a result of the absence of any state standards and oversight of local efforts, the quality of adopted local plans and ordinances varied widely. In some cases, local officials had simply asked their property-owning constituents what zoning they preferred.

In 1973, SB 100 maintained SB 10's local government plan-making and zoning mandates, a deadline to complete those tasks, and authorization for a new state agency—the Land Conservation and Development Commission (LCDC)—to grant extensions and to take over planning and zoning when a local government failed to comply. LCDC was required to adopt statewide planning goals to provide standards for local government planning and zoning and to enforce conformance with those goals. The SB 10 goals were incorporated into SB 100 to serve on an interim basis, and they provided the foundation for the first set of fourteen statewide land-use planning goals that LCDC adopted in 1974. 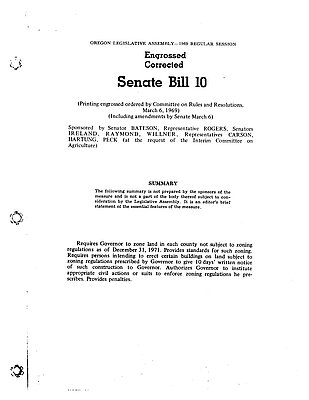