Scappoose Peace Candle of the World

The Peace Candle of the World is a distinctive landmark on Highway 30, near the southern boundary of the Lower Columbia River town of Scappoose, Oregon. Fifty feet tall and eighteen feet in diameter, the Candle was initially coated with 45,000 pounds of multicolored wax and topped with a wick. The Candle was built by Darrell Brock and his family, who had reconstructed a dairy barn in Scappoose and opened a candle-making business, Western Candle. They used the core of the farm’s grain silo to build the landmark project in 1971.

Darrell Brock was a twenty-three-year-old South Dakota farm boy when he came to Oregon in 1955. He found work at a Portland candle factory and in 1959 worked on the 20.5-foot-by-35-inch Oregon Centennial Candle in Damascus. He wanted something similarly grand to showcase his business and the City of Scappoose, and the old silo provided the opportunity.

Brock wrapped the silo in wire mesh and then used four hundred feet of pipe to carry hot wax to the top of the structure, where it dripped over and covered the meshing. A piping system constructed inside the silo helped keep the wax from melting during the summer, and the wick was kept aflame by the intermittent use of oil and natural gas.

The Brocks asked Governor Tom McCall to help establish the candle as a symbol of world peace by celebrating a lighting event on Mother’s Day, May 9, 1971. The governor accepted the invitation and spoke to an estimated crowd of five thousand people. He praised Brock’s enterprise and called the occasion “a tremendous day for the State of Oregon, and the United States of America, and for all the things we stand for as patriotic citizens.” Together, McCall and Brock lit the Peace Candle of the World with a specially purposed sixty-foot match, and Western Candle employees rode a lift high enough to set the match to the wick.

Over time, the weather took its toll on the Candle, and a subsequent owner replaced the wax with gunite (a mixture of cement, sand, and water) and coated it with red epoxy paint. The original wick was replaced by a neon flame. In 2015, Weather.com, a weather and travel website, selected the Scappoose Peace Candle of the World as Oregon’s Most Incredible Roadside Attraction.

Although Western Candle is long gone, the Peace Candle continues to be maintained under private ownership in Scappoose, where it serves as a landmark for residents and travelers on the lower Columbia River. 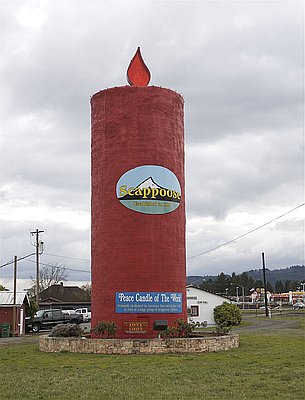 Prehistoric Gardens, with its twenty-foot-tall concrete Tyrannosaurus greeting travelers a few miles south of Port Orford on Highway 101, has been a successful commercial roadside attraction for over six decades. Along a winding path through a dense forest of spruce and sword ferns, twenty-three life-size sculptures of dinosaurs and other extinct …

Located on the Multnomah Channel twenty miles northwest of Portland, Scappoose is one of seven incorporated cities in Columbia County. The Multnomah Channel flows north a mile east of the city, and its opposite shore embraces the west side of Sauvie Island. Before incorporation in 1921 defined the city’s boundary, …