Paul Revere and the Raiders

Paul Revere and the Raiders combined a punchy garage-rock sound, Revolutionary War costumes, and a deceptive wholesomeness into a cocktail eagerly consumed by young fans and the music industry in the mid-1960s. The group put Oregon and the Pacific Northwest on the rock-music map.

Organist Paul Revere Dick met Eugene-born singer Mark Lindsay in Idaho in 1958, when he formed a group called The Downbeats. The band soon moved to Oregon. Urged to capitalize on his name familiarity for promotional reasons, Revere adopted the eponymous band name. By 1961, the Raiders had six members and a Top 40 hit with "Like Long Hair." In 1963, the Raiders’ recording of “Louie Louie” competed for the top spot with that of another Oregon band, the Kingsmen, whose rendition remains the iconic version.

As the first rock band signed to the Columbia music label, the Raiders were the darlings of pop television, from Dick Clark’s Where the Action Is to Hullabaloo. They produced a flurry of memorable songs such as “Kicks,” “Him or Me—What’s It Gonna Be?” and “Hungry,” but by the late 1960s they were overwhelmed by the psychedelic era and the counterculture.

Despite the success of Mark Lindsay’s song “Indian Reservation” in 1971, the band devolved into a tribute to itself. Its early work proved highly inspirational to later punk and New Wave artists, including the Sex Pistols, Joan Jett, and David Bowie; and the Raiders deeply influenced the styles and aspirations of later musicians, both nationally and in the Pacific Northwest. 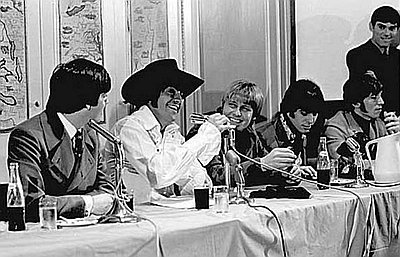 Brown,Valerie. “Music on the Cusp: From Folk to Acid Rock in Portland Coffeehouses, 1967–1970." http://www.historycooperative.org/journals/ohq/108.2/brown.html