In 1850, President Millard Fillmore appointed John B. Preston as Oregon Territory's first surveyor general. Preston arrived in the territory in 1851; and by the time he and the last of his surveyors left in 1855, the western interior valleys of Oregon and Washington lay measured in the townships and sections of the Rectangular Land Survey System.

This effort was part of the federal system established by Congress in the Land Ordinance of May 20, 1785. Until then, Colonial America’s rural population had determined land boundaries by the English method of defining a parcel of land—identifying adjacent landowners and describing boundaries as on some apparent line, such as a stream or road. To avoid these often-confused "metes-and-bounds" surveys, the Land Ordinance introduced an orderly system of laying one-mile square parcels on federal lands. In a format used ever since, the Ordinance stipulated that surveyors establish a north-south principal meridian and an east-west base line. Next, they were to calculate parallel lines of longitude and latitude six miles apart, creating townships of thirty-six square miles.

Congress passed the Oregon Donation Land Act in September 1850. Designed to promote new settlement in the territory, the legislation provided for the award of land claims to settlers who met certain requirements. In the spring of 1851, thousands of settlers who had journeyed to Oregon in the 1840s lived on lands described in terms of trees, streams, and hills. The settlers needed their land measured accurately so they could divide and sell it, and they pressed for the surveys and official designation of claims boundaries.

During four years in Oregon, surveyors James Freeman, William Ives, Butler Ives, George Hyde, and Joseph Hunt boosted the territory’s population by enabling the legal establishment of Donation Land Claims and helping establish commerce, both precursors to the stability and increased confidence that led to Oregon’s statehood in 1859.

On June 4, 1851, Surveyor General Preston and surveyors Ives and Freeman convened about four miles west of Portland at what is now Willamette Stone State Park. Their first task was to lay out the Willamette Meridian (north and south) and Base Line (east and west) as a framework for all surveys to come. Freeman would survey the Willamette Meridian from the Initial Point south, while Ives’s contract required him to survey the Meridian north from the Initial Point to Puget Sound, as well to survey the east-west Base Line.

The surveyors moved along the meridian line using two sets of measuring chain for accuracy, comparing measurements at every half-mile and mile station. Flagmen marked the line with cloth strips. The surveyors ran the solar compass, or the transit, and recorded calculations. Axemen marked bearing trees and hewed posts. The chainmen came next, unfolding the heavy wire sections of bundled Gunter's chain. Then, stretching the chain taut for accuracy over uneven ground, they measured the line.

Ives reached Puget Sound and returned to the Initial Point to survey the Base Line, from rugged country in the Coast Range to the foothills of the Cascades, before stopping work in mid-August 1851. Heading south, James Freeman eventually encountered steep, mountainous terrain and ended his survey east of Canyonville in August 1851.

Pressured to begin surveys in the Willamette Valley and later deterred by hostilities between whites and Indians in southwest Oregon, the surveyor general postponed completion of the Willamette Meridian to the California boundary until the summer of 1854.

The federal surveys went on through the ensuing decades, moving east of the Cascades and along the coast. The work of these earliest government surveyors, however, remains outstanding in Oregon’s development. Their surveys did far more than make it possible to organize land ownership. In the long term, these men had a hand in the Oregon Territory becoming part of the nation, sustaining the continuum of western expansion, and helping shape the mid-nineteenth-century landscape.

The surveyors’ field notes and maps became indispensable to federal, state, and county officials. Present-day surveyors take the old records in hand to locate markers and to resolve boundary disputes. They note the precision with which the early government surveyors executed their contracts. The value of the older work lies in the early surveyors' honesty and skill.

Today, the early field notes and maps are also used by biologists to document historic vegetation and by historians and anthropologists to search for the locations of long-vanished Indian settlements, trails, and settlers’ farmhouses and barns. The surveyors, their maps, and notes give us an opportunity to envision the past, to imagine the way western Oregon and Washington looked over 150 years ago. 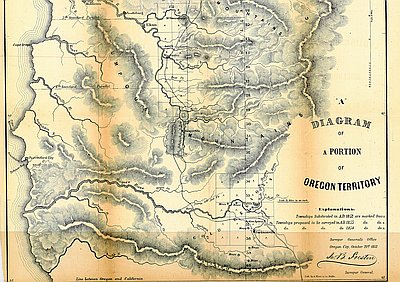 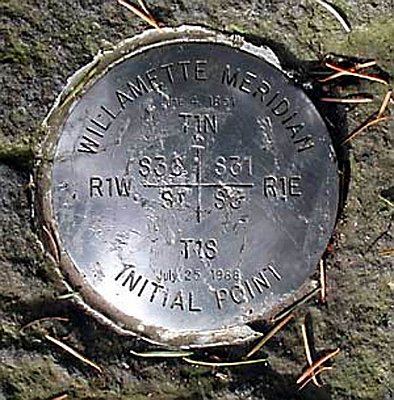 With the acquisition of the Oregon Country in 1846, the United States was faced with an enormous challenge to administer what had become a significant part of the nation’s federally owned public domain. American Indian title, preemption settlement, existing land claims, and the great westward migration were urgent matters to …

Land surveys accomplished under the U.S. Government's Rectangular Survey System are the basis for the establishment of land titles and boundaries within Oregon. The initial point for the land surveys in Oregon is referred to as the Willamette Stone; and the principle survey meridian, running north and south, is named …