A hundred years ago, many birds carried the name of “Oregon,” including Oregon Jays, Oregon Chickadees, Oregon Titmice, and Oregon Towhees. One by one, those names fell into disuse or were discarded. The last bird bearing the state's name is the Oregon Junco.

Juncos have considerable geographic variation, and many North American Juncos once treated as separate species are now known to freely interbreed where their ranges overlap. Thus, the Slate-colored Junco of the East, the Gray-headed Junco of the Southwest, the White-winged Junco of the Black Hills of South Dakota, and the Oregon Junco were combined into a single species and given the name Dark-eyed Junco (Junco hyemalis).

Where most sparrows wear shades of brown and are often striped, juncos are brown and striped for only the first month or two of life. By September, they wear a dark hood that identifies the species. The Oregon Junco is distinguished from other juncos by the male's pinkish-brown sides and black head; the female's head is gray. All juncos have a pink bill and white outer tail feathers.

Regardless of the season, Oregon Juncos are one of the most common birds in the state and are fixtures at backyard feeders in winter. In the breeding season, they can be found in the understory of coniferous forests, from ponderosa pine to mountain hemlock and from Douglas-fir to lodgepole pine. Where more open habitats typically support two or three breeding species of sparrows, only the Oregon Junco lives in the deep shade of the dense forests. Unlike many of the state's breeding birds that travel to Mexico or beyond for the winter, Oregon Juncos may spend the cold months in the lower forests in the foothills and in hedgerows on the valley floor.

Typically, Oregon Juncos rear two broods a year, beginning in early spring. Nests are on the ground, usually tucked under the edge of a fallen log or shrub. The three to five eggs are white speckled with brown. Incubation lasts twelve to thirteen days, and young juncos fledge eleven to twelve days following hatching. While specializing on seeds for much of the year, Oregon Juncos harvest insects when they are rearing their young.

Oregon Juncos forage quietly on the ground, flashing their white tail feathers with each hop to communicate their location to their mate or other members of a flock. When flushed or when interacting with other juncos, they give a hard, distinctive call note.

The song of the Oregon Junco is a sweet trill. If you listen closely, you can hear the rapidly delivered notes vary in frequency, a richness often lost on human ears but undoubtedly important to the junco. Songs vary among males, and a few birds sing a two-part song consisting of distinct and different trills. 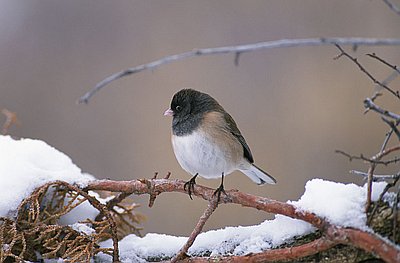