In the summer of 1970, two young choral conductors—one from Stuttgart, Germany, the other from Eugene, Oregon—planted the seeds of a summer music festival, seeds that took root and were nurtured by a caring community and a major university. What seemed at the time to be an insignificant "planting" ultimately became the internationally known Oregon Bach Festival and the model for similar festivals in many other parts of the world.

In 1968-1969, Royce Saltzman, professor of music at the University of Oregon, was director of the International Center for Music Education, an overseas program that allowed students to take a year of study in Germany. During his residency, Saltzman met Helmuth Rilling, a young conductor from Stuttgart College of Music, and invited him to teach two master classes at the University of Oregon in 1970, one for conductors, the other for organists, as well as to conduct a program of choral music.

The results of that first summer were so positive that plans were made for Rilling to return to Oregon the next year. Five concerts were scheduled, two of which were performances of Bach's St. John Passion, one conducted by students in the master class, and the other by Rilling. The program was called the Summer Festival of Baroque Music. Tickets were $2 per concert, $7.50 for the entire series.

There were six concerts in 1972, including Bach's Mass in B Minor, followed by two performances of the St. Matthew Passion the following summer. The series was named Summer Festival of Music. In 1981, the series was re-named the Oregon Bach Festival to more clearly identify the location and musical focus.

In 1983, the festival came of age with the completion of the Hult Center for the Performing Arts in Eugene, a venue that included a concert hall that would seat 2,500 people and a theater/concert space for 450. That same year, at the invitation of the Los Angeles Philharmonic Association, Rilling conducted the Oregon Bach Festival choir and orchestra in the B Minor Mass at the Hollywood Bowl to an audience of nearly 8,000. A return visit came in 1985, the 300th anniversary of Bach's birth, when the festival performed the St. Matthew Passion and the B Minor Mass .

The Oregon Bach Festival has had a major impact on the choral scene worldwide. Students attending the master class in conducting have come from more than thirty countries, from Inner Mongolia to Cuba, from Cyprus to Tasmania, from New Zealand to Malaysia, and from major universities and communities throughout the United States and Canada. World renowned artists and lecturers have appeared at the festival, including Tan Dun, Osvaldo Golijov, Garrison Keillor, The King's Singers, Keith Jarrett, Bobby McFerrin, Midori, Krzysztof Penderecki, Thomas Quasthoff, Tony Randall, Billy Taylor, and Frederica von Stade.

Emphasizing international bridge-building through singing, the Festival has hosted guest choirs from Cuba, Finland, Germany, Israel, Japan, Korea, Latvia, New Zealand, Sweden, Taiwan, Uganda, and Venezuela. Adding to this global outreach is a series of twelve recordings, under the Hännsler Classic label, that have been released for international distribution. From 1999 to 2001, syndicated broadcasts of festival concerts were aired on 245 radio stations and translators in the United States and Canada.

While the Oregon Bach Festival emphasizes the music of Johann Sebastian Bach, works by composers such as Brahms, Beethoven, Haydn, Monteverdi, Mozart, and Verdi are also performed. Music by living composers is a priority. In 1994, the festival commissioned Arvo Pärt to compose Litany. Osvaldo Golijov in 1996 composed the cantata Oceana. And in 1998, in a joint collaboration with the Internationale Bachakademie Stuttgart, Krzysztof Penderecki was commissioned to write Credo, the recording of which was the Best Recording by a Living Composer at the Cannes Classical Awards Festival and received a Grammy for Best Choral Performance at the 43rd Grammy Awards.

The festival's commitment to youth education led to a choral program in 1998, for eighty-five high school singers. A gift from the Stangeland Family Foundation assures the program's future.

The mission of the Oregon Bach Festival is to inspire the human spirit through the art of music. As a program of the University of Oregon, the festival provides quality  performances and innovative educational opportunities, involving a broad-based community of musicians, audiences, and donors in a manner that assures the long-term sustainability of the organization. Oversight of the festival comes from a volunteer board of directors, which functions in accordance with a set of by-laws and a charter from the president of the university.

After 44 years as artistic director, Helmuth Rilling retired in 2013.  Matthew Halls succeeded him (2014-17). Starting in summer 2018, guest curators will work with festival staff and the university to build a festival of musical selections, aligned with the university's goals, led by world-renowned conductors. 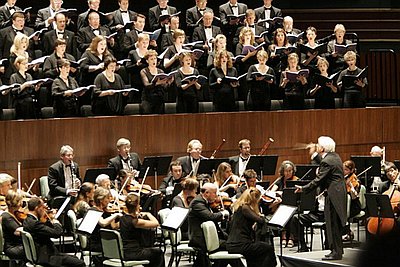 An outstanding vocalist and conductor, Royce Saltzman was a popular teacher and choral director at several colleges before coming to the University of Oregon in 1964, where he has been professor emeritus since 1994. Saltzman was born in Abilene, Kansas, on Nov 18, 1928. He was graduated from Goshen College in …

In 1970, Helmuth Rilling was one of the founders of the Oregon Bach Festival. His tenure as artistic director, conductor, and teacher at the Festival has had a major impact on the international choral scene. Students attending his conducting master class have come from more than 30 countries, and from …