Chanterelle mushroom refers to a group of mushrooms that usually have a funnel-like shape and ridges, instead of gills or pores, that extend down the stem on the underside of the cap. In 1999, the Oregon legislature chose the Pacific golden chanterelle as the official state mushroom, which is found in prodigious quantities in Oregon and is coveted for its culinary, nutritional, and medicinal values. Wild chanterelle mushrooms are a major fall crop for commercial pickers and mushroom enthusiasts.

The chanterelle family contains about ninety species worldwide and over forty species in North America. Seven species, within four genus types, are found in Oregon and the Pacific Northwest. The Pacific golden chanterelle (Cantharellus formosus) grows among Douglas-fir, hemlock, and spruce. Its orange and yellow funnel-shaped cap, wavy margins, solid white flesh, and blunt branching ridges on the underside of the cap that extend down the stem make it one of the most reliably identifiable edible mushrooms in Oregon.

Other Oregon chanterelle edibles include the white chanterelle (Cantharellus subalbidus), a creamy white version of the golden chanterelle that grows in similar habitats; the rainbow chanterelle (Cantharellus roseocanus), which has a brighter orange color and grows with Sitka spruce and shore pine at low elevations and Engelmann spruce at high elevations; and the winter chanterelle (Craterellus tubaeformis), also called the yellowfoot, which has a small brownish orange ocher cap, with a depressed center and blunt ridges on the underside of the cap that run onto a hollow yellow stem, usually clustered on well-decayed wood. There are also Pig’s ears (Gomphus clavatus), with olive tan on tops and purple lavender undersides, found with conifers; the relatively rare blue chanterelle (Polyozellus multiplex), which grows in old conifer forests; and the black trumpet (Craterellus cornucopioides), or horn of plenty, found primarily in southern Oregon in the duff of tan oaks and other broad-leaf species.

Two other species in Oregon fit the chanterelle mushroom group description, but are of questionable edibility and may be toxic to humans—Turbinellus floccosus, a wooly false chanterelle with a bright red to orange shaggy-scaly cap, and Turbinellus kauffmanii, a similar mushroom but with a tan cap. Both grow in mixed conifer forests.

The chanterelle mushroom is the fruiting body of a fungus that consists of microscopic, hairlike filaments, called hyphae, which grow in forest soil as a mycorrhizal partner with host trees. The hyphae form a sheath, called an ectomycorrhiza, around a tree’s live root tips. A symbiotic exchange takes place, as the vast network of fungal hyphae supplies the tree with water and nutrients, while the tree supplies the fungus with carbohydrates.

Fungal hyphae can be as long lived as the host tree if they stay in contact with the host tree’s roots. A network of hyphae forms what is called a mycelium; and chanterelle mushrooms form from a dense clot of mycelium called primordial, which have the potential to form mushrooms under favorable conditions.

In the Pacific Northwest, the mushrooms usually pop up from late summer to late winter. No one knows all the triggers for the timing and the number of mushrooms a golden chanterelle fungus will produce, but they are thought to include the health of the host tree, spring and summer temperatures, the amount and timing of fall rains, soil temperature, and soil bacteria. In plantations or farms, the chanterelle fungus begins producing mushrooms when the trees are ten to forty years old. Chanterelles do grow in old-growth stands of trees, but they are not as abundant. Pickers have reported that they are more abundant along old logging or skid roads.

Golden chanterelles are relatively slow growing—from two to five centimeters a month—and persist for an average of from forty-four to over ninety days. They release their spores slowly and sporadically over their lifespan. Insects rarely infect golden chanterelles, and some scientists speculate that they develop a repellant for fly larvae, which infect many Pacific Northwest mushrooms.

Mushroom enthusiasts often speculate about whether it is better for the future of the fungus to pluck or cut it when harvesting. A study on the Bull Run Watershed by the Oregon Mycological Society, however, determined that harvesting did not reduce mushroom production, although cut patches had a slight reduction compared to patches where the mushrooms were plucked and controlled.

Because of the mycorrhizal connection with trees, it is difficult to grow chanterelles domestically. The European Cantharellus cibarius has been isolated, grown in a pure culture, inoculated onto the roots of Pinus sylvestris seedlings, and produced in a greenhouse. U.S. Department of Agriculture researchers have tested various methods to cultivate crops for commercial use more efficiently, with some success.

Many mushroom guidebooks rate the edibility or toxicity of mushrooms, but caution must be taken. If collecting mushrooms for the table, one rule supersedes all others: If in doubt, throw it out. 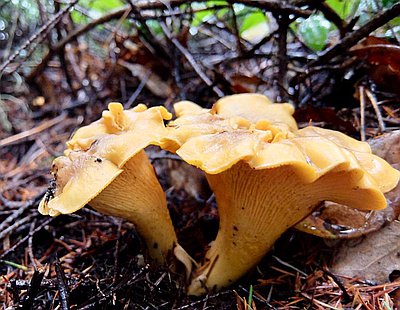 Conifers (cone-bearing trees) are the major plant group in Oregon in terms of numbers and biomass. No group of plants has played a greater role in Oregon's history, ecology, and economics than the conifers.

Conifers grow from sea level to mountain tree line throughout the state and dominate the landscape, …