Ballot Measure 5, an initiative passed by Oregon voters in November 1990, fundamentally changed Oregon’s property tax and public school funding systems. Voter approval of Measure 5, and of Measure 47 in 1996 and Measure 50 in 1997, demonstrated the great force of anti-tax fervor in that decade. The resulting restrictions in local school district revenues transformed the funding of Oregon's public school system to make it primarily dependent on state general revenues controlled by the legislature rather than on local school boards.

Measure 5’s passage reflects three factors: (1) an insurgent conservative activism in the state; (2) great inconsistencies and disparities among local schools districts and general voter ignorance of the school funding system; and (3) the acceleration of housing values and property taxes in the Portland metropolitan area.

Crafted by Don McIntire (1938-2012) and Thomas Dennehy (1928-1998), anti-tax activists and the measure’s chief petitioners, Measure 5 focused on property taxes. It seemingly protected local school funding by requiring state government to compensate school districts for the property tax losses during the phase-in period, during which property tax limits were gradually reduced to one-half percent of real market value for local school districts and one percent for all other local government by the 1995-1996 budget period.

By November 1990, voters could not ignore the accelerating property taxes and the instability of the public school funding system, highlighted by temporary school closures in towns like Estacada. In some parts of the Portland metropolitan area, property taxes were as high as $33 per $1,000 value. While there was much disagreement over exactly what should be done, across the political spectrum and throughout the state there was a sense that some sort of reform was inevitable and necessary. Even the liberal weekly newspaper Willamette Week endorsed Measure 5. Despite vigorous opposition by those who feared either the budget consequences of or the uncertainty related to the measure—including gubernatorial candidate Barbara Roberts, the Oregon Education Association, and the Associated Oregon Industries—it won 52 percent of the vote, primarily from Portland-area voters.

Measure 5 constitutionally limits total nonschool property taxes to one percent ($10 per $1,000 real market value), which significantly limits local revenue options. The most visible effects of the measure, however, are the limitation of basic local school property taxes to one-half percent ($5 per $1,000 assessed value) and the state’s obligation to replace lost school revenues during the phase-in period. Technically, the state was not responsible for replacement costs after 1996, but the legislature’s increased commitment to local school funding has become both a practical and a political reality.

The policy effects of Measure 5 are inextricable from those of Measure 50, which Oregon voters passed in 1997 to respond to perceived or real shortcomings in Measure 5. Measure 5 requires all counties to more frequently reassess property values. Almost immediately it was clear that the upward revisions of assessed values would offset the impact of lower tax rates for many homeowners, particularly in the Portland metropolitan area. Consequently, some homeowner tax bills actually increased following the passage of Measure 5. Further, industrial and commercial property owners enjoyed much greater savings due to the accuracy of their assessments.

In 1996, Oregon Taxpayers United, led by Bill Sizemore, promoted a measure (Measure 47) that would roll back assessments by 10 percent and limit the annual rate of increase for assessments to 3 percent. Measure 47 passed with 52 percent of voters in support. The language of Measure 47 had enough uncertainty that conservative legislators and Bill Sizemore himself feared that Attorney General Hardy Meyers's interpretation of the measure would weaken the reform. Furthermore, rural legislators could see that without some amendment, Measure 47 would devastate rural hospitals. Therefore, the Republican-dominated legislature refined it into the less drastic but still sweeping reform, known as Measure 50, which passed easily in 1997.

According to the October 2006 issue of Oregon Business, the first sixteen years of Measure 5 and Measure 50 reduced local revenues by $41 billion. The proportion of K-12 operating expenses funded by the state’s Basic School Support Fund (primarily the state’s general fund) went from 28.6 percent in 1990-1991 to a high of 70.6 percent in 1998-1999. School district dependency on state general funds remained above 66 percent until the recession starting in 2009 brought the number down to 63 percent. Increased state funding promoted school district equalization, stabilizing and increasing spending in poorer districts while making relative cuts in per capita spending in the state’s wealthier areas.

In response to Measures 5 and 50, the share of the state general fund going to the Basic School Fund rose from 25 percent in 1989-1991 to 42 percent in 1999-2001. This increase squeezed other elements of the general fund, with higher education’s share declining from 14 to 7 percent. Even with the boom times of the 1990s and cuts in other general fund programs by 2011, a state legislative panel found that Measures 5 and 50 were the foremost explanation of why funding for K-12 schools fell more than $3 billion short of the amount needed to meet state goals.

McIntire and his associates remain heroes to fiscal conservatives for reducing the state’s overall tax burden and for changing the trajectory of state spending, while advocates for public programs argue that Measures 5 and 50 have crippled important public services. Oregon’s ranking in property tax per capita has dropped from seventh in 1989 to twenty-sixth in 2010, but at the price of greater state control over local school budgets and increased dependence on the more volatile income tax. 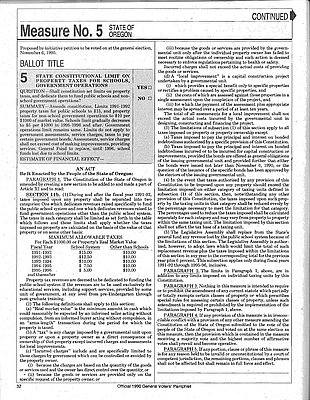