Anne Kutka McCosh, a nationally recognized and regionally important visual artist and teacher, lived in Eugene for the last sixty years of her life. Her work in oil and gouache during the 1930s and 1940s, which focused on the character of urban life in New York City and the college town of Eugene, is in the narrative tradition of American Scene painting. In the 1950s and 1960s, her focus shifted to making insightful and expressive portrait studies, often of women and children in oil and also in charcoal and ink drawings and lithographic and woodcut prints. Her later work shows the influence of her mentor in drawing, Kimon Nicolaides, and of Mexican muralists Jose Orozco and Diego Rivera.

Born in Danbury, Connecticut, Anne Kutka was raised in Yonkers, New York, in a large immigrant family with a strong Czech heritage. When she was a young girl, her sister bought art supplies for her and encouraged her to try her hand at drawing. Her siblings and friends were delighted by Anne’s early efforts at illustrating stories, which led her to enter the Yonkers School of Design in 1916. During the 1920s, intent on making art her life, she worked her way through the Art Students League in New York City, where she studied with influential artists and teachers Kenneth Hayes Miller, Thomas Hart Benton, and Kimon Nicolaides.

Between 1928 and 1933, when modernism was sweeping through American art, Kutka worked as the manager of the G.R.D. Studio Gallery on 57th Street in Manhattan. She often talked about the new trends in painting with major collectors and famous artists who visited the Gallery, including Jose Orozco, who had a studio nearby. Her spirit, talent, and insight were recognized with successive Tiffany Foundation Fellowships and a G.R.D. Gallery Scholarship, which allowed her to travel and study painting in Mexico, where she met the muralist Diego Rivera. She also worked in the Foundation’s studio facilities at Oyster Bay on Long Island.

At Oyster Bay she met the young painter, David McCosh, also a Tiffany fellow, and he became the love of her life. They were married in 1934 and moved to Eugene, where David accepted an appointment to teach painting at the University of Oregon. He became an influential teacher and a major Northwest artist, benefitting greatly from Anne’s support, which allowed him to focus on his work and teaching.

Anne McCosh was a major presence in the arts in Eugene. She taught at the Maude Kerns Art Center for more than twenty years and in her private studio at home. Her students were young people, who came to her to explore art as a means of personal expression, and older women and men who now had the time to develop a long-suppressed interest in art. McCosh was an inspirational teacher who treasured and encouraged art made with serious intent, but she was unstinting in her candid criticism of even well-known artists whose work failed to meet the professional standards that she believed all artists must master.

McCosh was a well-regarded painter who exhibited regionally and nationally. In the 1950s and 1960s, she and David traveled throughout Oregon and to Mexico, Europe, and the American Southwest. While he focused his art on the landscape, she created a series of drawings and paintings that capture the character of people she encountered. Her work is in the permanent collections of the Hallie Ford Museum of Art, the Jordan Schnitzer Museum of Art, and the Portland Art Institute.

Toward the end of the 1960s, David McCosh contracted a debilitating disease, and Anne gave up her art to dedicate herself to his care. After his death in 1981, she worked to preserve his extensive body of work and his legacy as a teacher. In 1990, she contributed her entire estate to the University of Oregon Foundation to create the David John and Anne Kutka McCosh Memorial Endowment Fund of the Jordan Schnitzer Museum of Art, which provides funding for the preservation and study of David’s work and other related programs. Only after the endowment was in place did McCosh permit her own work to be exhibited again. She believed that her responsibility was to preserve David’s work and promote his legacy, even though it meant neglecting her own.

In 1991, a retrospective exhibition Art from Life: Painting and Drawings by Anne Kutka McCosh was presented at the Jordan Schnitzer Museum. Her work also was shown in the national touring exhibition Women of the West 1890–1995 and in gallery exhibitions in Seattle and Eugene. Her legacy as an artist is in her ability to capture and recreate the character of another person in her paintings, drawings, and prints. McCosh died in Eugene in March 1994. 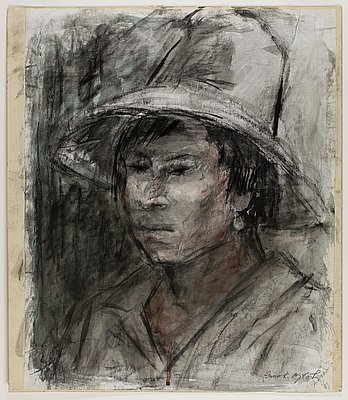 David McCosh, an important Oregon painter and influential teacher, was born in Cedar Rapids, Iowa, in 1903. He spent a year studying liberal arts at Coe College in 1922 and a year later began six years of study at the Art Institute of Chicago, from which he graduated in 1926. In …

Eugene is a metropolitan center at the head of the Willamette Valley, approximately 110 miles south of Portland. The seat of Lane County, the city had an estimated population of 169,695 in 2018—nearly equal to the capital city of Salem. Eugene is known for outdoor recreation, bicycle and hiking …