Jordan Craters is an otherworldly place, beautiful and foreboding, an outdoor museum of recent basalt volcanism amid sagebrush steppe rangeland. Located about eighteen miles northwest of the town of Jordan Valley, Jordan Craters is near the geographic boundary between the southeastern High Lava Plains and the western Owyhee Uplands portions of Oregon’s High Desert. It is one of five basalt lava fields east of the Cascade Range in Oregon younger than 18,000 years in age.

Together with pristine basalt volcanic features, this seemingly unforgiving terrain supports localized habitats that are rich in fauna, earning it a designation as a Bureau of Land Management Research Natural Area, an Area of Critical Environmental Concern, and a Wilderness Study Area. Jordan Craters has long been known to Native peoples, local ranchers, hardy travelers, scientists, photographers, and members of nearby communities such as Jordan Valley, the town after which the volcanic area is named, and Danner, the final resting place of Jean Baptiste Charbonneau.

Israel C. Russell first described the geology of the area in 1903 and applied the name Jordan Craters to four approximately north-south aligned “recently extinct volcanoes.” Over time, the name has narrowed to refer only to the northernmost and youngest of the volcanoes and its products. In this context, Jordan Craters encompasses an area of about 26 square miles dominated by a lava field that is an estimated 0.2-0.4 cubic miles in volume. The basalt lava field is sourced from Coffeepot Crater, nestled in the northwestern corner of the field (labeled Crater No. 4 in Russell’s report and Morcom Crater, after a nearby ranch, in early descriptions).

The Coffeepot Crater volcano was born when mildly explosive eruptions constructed a cone from overlapping lobes of dense and fragmental ejecta (the material thrown out from a volcano). Rising magma occupied the volcano’s conduit, creating a lava pond, and leaked out along a 0.7-mile linear subsurface crack (fissure) extending southwest from the main crater. Within 0.2 miles of the main crater, chimneylike structures up to 20-25 feet tall (spatter/driblet cones) formed atop this fissure as pasty blobs of magma were ejected and fell to the ground.

Fluid basalt outflow from Coffeepot Crater was fed by lava pond spillover and an extensive tube system that infilled topographic lows to build a prominent smooth to hummocky to ropy surfaced (pahoehoe) flow field that extended up to 10 miles from the crater. Sections of the original crater wall were rafted away by lava from the pond, which was later infilled by thin pahoehoe sheets as the pond was reestablished. Backflow of the lava pond into the conduit marked the final activity at Coffeepot Crater, leaving behind pahoehoe crust on the crater floor and vertical striations carved into the inner crater walls. Jordan Craters is a small but outstanding illustration of the processes, materials, features, and landscape exemplified by Kīlauea in Hawai’i.

The excellent preservation of primary eruptive and flow features and a nearly total lack of soil and vegetation development suggest that Jordan Craters is younger than the most recent eruptions at nearby Diamond Craters, where eruptions were recently assigned an age range of 7,320 to 7,780 years ago. A single radiocarbon age for charred wood found at the base of a sediment core from Upper Cow Lake suggests that lava that flowed southeasterly, occupying and ultimately damming the ancestral Cow Creek drainage to form the Cow Lakes, may have been emplaced less than 3,200 years ago.

Considering this general chronology and archaeological evidence from throughout the Owyhee Uplands, it is fair to suggest that early Native inhabitants may have witnessed the main Jordan Craters eruptions. One particular petroglyph site, which stands guard over a portion of the Jordan Craters lava flow field, presumably overlooked important hunting and gathering grounds in ancient wetlands prior to basalt emplacement. More recent Bannock–Northern Paiute peoples may have witnessed a spurt of activity from Jordan Craters within the last few hundred years, based on accounts passed on to EuroAmerican explorers and settlers in the 1800s about fire and smoke coming out of the ground. Additionally, the lack of lichen colonization in an 18-acre area within the main basalt flow field may indicate that minor eruptive activity occurred on the order of a century ago. Even with this possible historic activity, Jordan Craters has been assessed to pose a very low threat, ranking 148 out of 161 U.S. volcanoes classified. 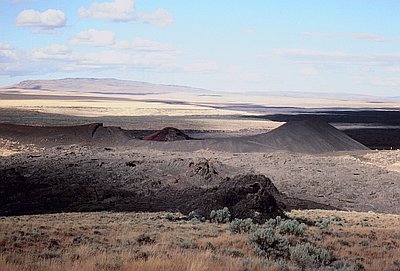 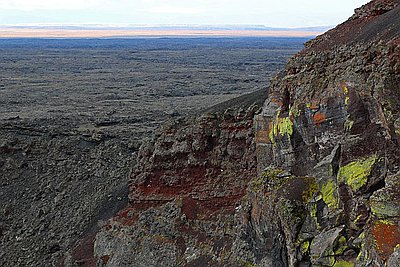 The town of Jordan Valley stretches along Highway 95 in Oregon’s High Desert. At an elevation of 4,385 feet, the town is on the north side of Jordan Creek, a tributary of the Owyhee River. Located on a volcanic plateau, Jordan Valley was shaped by volcanic eruption about 150,000 years ago. …