Cornelius "Neal" Gilliam was a prominent settler in Oregon in the 1840s and the namesake of Gilliam County. He was born on April 13, 1798, in Buncombe County, North Carolina, and moved with his family to Missouri when he was young. He married Mary Crawford in 1820 and in 1830 was elected sheriff of Clay County, Missouri. He fought in the Black Hawk War in Illinois in 1832, and in 1837 served as captain with the Missouri Volunteers in the Seminole War. Returning to Missouri, he was instrumental in military operations to expel the Mormon colony from the state and was promoted to colonel. In 1843 he was elected to the Missouri legislature and was also ordained as a Free-Will Baptist preacher.

In spring 1844 Gilliam and his family, extended family, and friends joined other emigrants who were organizing at the Missouri River to travel overland to Oregon. Soon after departing in May, Cornelius Gilliam was chosen to command the large train of more than three hundred people and about eighty wagons. Gilliam was referred to as "the general" by many in the train, and by others simply as "captain." According to one member of the train, Gilliam had a bad temper, and when his authority was challenged, he reacted with raging tirades filled with threats. Another described him as uneducated, obstinate, and impetuous, while sometimes exhibiting kindness and common sense.

Two months into the journey, after too many delays and a disastrous buffalo hunt, the members of the train were openly dissatisfied with Gilliam's leadership. In mid-July, a few days after reaching the Platte River, Gilliam called the men together and resigned as captain in an angry, bitter speech. After his dramatic resignation, the members reorganized into smaller companies. Although he was no longer leader of the overall train, Gilliam continued as the head of a company that included many of his family members and other supporters.

After arriving in Oregon, the Gilliam family wintered at the site of present Cornelius (not named for him). In spring 1845 they settled on a claim at the present town of Dallas. In fall 1847, they moved to another location twelve miles away at Pedee Creek, which Gilliam or a member of his family named. That same fall, overland emigrants brought Gilliam's appointment as postal agent from Washington, D.C.

Gilliam was appointed colonel of a regiment of volunteers to avenge the November 1847 killing of Marcus and Narcissa Whitman and others at their mission. After engaging the Cayuse Indians in a battle near present-day Walla Walla, Washington, Gilliam started back to report to territorial officials. On March 24, 1848, at a camp at Upper Well Spring on the Oregon Trail, Gilliam was instantly killed by the accidental discharge of a loaded gun that caught on the rope he was pulling out of a wagon. His body was transported to Dallas for burial, and a memorial marker at Upper Well Spring marks the site of his death. 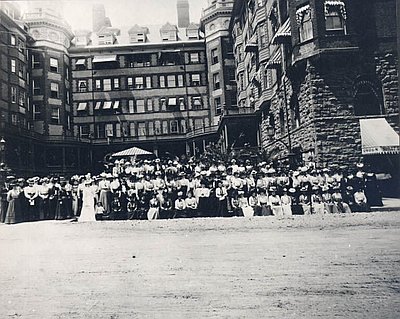 Rumer, Thomas A. The Wagon Trains of '44: A Comparative View of the Individual Caravans in the Emigration of 1844 to Oregon. Spokane: Arthur H. Clark Co., 1990.