Francis was born in Portland on March 20, 1915, to Swedish immigrant parents. His mother, a trained seamstress, had come to the United States as a child, and his father had immigrated in his late teens. Both parents trained their children to be hard workers, and his father emphasized the responsibilities of American citizenship. Francis spent most of his childhood in Woodburn and on his grandmother’s farm in the Fairfield district between St. Paul and Gervais, and he concluded early on that farming was not his preferred occupation. “I recall one evening cleaning out the barn, and the cow manure slid down the handle and onto the jacket I was wearing,” he told an oral historian in 1982. “I removed the jacket and concluded for sure that there had to be a better way of living than that.” Francis was impressed by a local lawyer he met in Woodburn, and while he was in high school he heard an Oregon legislator speak at the Grange. Years later, he remembered thinking it would be wonderful to become both a lawyer and an elected official—two goals he attained.

While Francis went through a brief Norman-Thomas-and-Socialism streak in college, he eventually turned from his fascination with the six-time presidential candidate and toward officials like Republican Charles McNary, the longtime Oregon senator known for moderate and bipartisan policies. He worked his way through the Northwestern School of Law in Portland, passing the bar exam in 1937. That same year, he learned that the Dayton Chamber of Commerce was looking for a lawyer and was so taken with the beauty of the town and its surroundings that he settled there. The history of the area got into Francis’s blood, and he became an authority on its pioneer lore.

Two years later, while helping a local pensioner with a legal concern, Francis met Viola Brodahl, a local social worker. "I bought her a Coke and pretty soon we got married," he later recalled. The couple had two daughters.

Francis was active in the Oregon Young Republicans and attempted a run for the legislature. In 1940, when he was twenty-five years old, Dayton voters elected him mayor—the youngest mayor in Oregon and second youngest in the nation. His rising profile led Governor Charles Sprague to appoint him to the Willamette Valley Project Committee, tasked with developing flood control systems. Francis demonstrated a political independence despite his tender years. Contrary to many of his Republican colleagues, he believed in the public control of hydropower, and he wasn’t afraid to say so.

Francis was elected to the Oregon House of Representatives in 1943. He served twelve years in the House and eight in the Senate, chairing the judiciary committees of both bodies. Among his chief legislative achievements was chairing a committee that oversaw the revision of Oregon's statutory legal framework. He remembered his years in state government as a time when politicians with different beliefs worked to maintain cordial relations. Democratic opponents such as Monroe Sweetland and Alf Corbett “were people that you could disagree with very strongly in the best courtroom manner and remain close friends....they had beautiful minds and were absolutely beyond reproach as far as integrity was concerned.”

Francis left the Senate in 1963 to return to his law practice in Dayton. He was elected Yamhill County district attorney in 1964, but served only fifteen months before Governor Mark O. Hatfield appointed him to the Yamhill County District Court bench. He was a district judge until 1973 and retired from his law practice in 1985. In his retirement, he was a volunteer greeter at the historic Dayton Block House, sharing his knowledge of the town's history with visitors.

After Francis died in Dayton on April 17, 1995, city officials remembered him as a "walking, talking chamber of commerce." 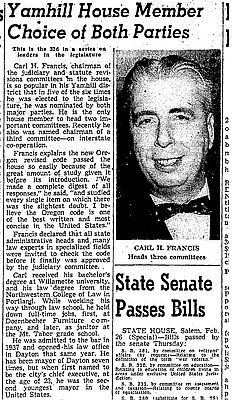 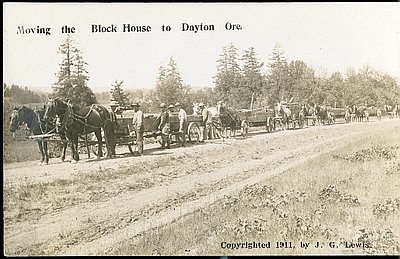 The Fort Yamhill Blockhouse is one of the few architectural remnants from the era of wars and treaties with Native people in western Oregon, from 1849 to 1860. The U.S. Army constructed the building at Fort Yamhill, near present-day Valley Junction, in March-April 1856. In 1911, preservationists moved the structure …

Monroe Sweetland's life embraced the cultural revolution of the 1920s, the crisis of the Great Depression, the violence of World War II, and the contentious politics of the United States as it moved through wartime and cold war crises and domestic unrest. Through a remarkably constructive life, Monroe Sweetland participated …