“Gem of the Cascades” is how Diamond Lake is heralded by those who trout fish, camp, swim, hike, sail, bicycle, and boat there in the summer or who ski, snowshoe, and snowmobile its basin in the winter. The lake, at 5,138 feet elevation on the Douglas County side of the Cascade Crest, is wholly within a designated recreational area in the Umpqua National Forest.

The oblong 3,031-acre lake is the single-most productive and popular trout water in Oregon. It extends northwest to southeast for 3½ miles and is 1½ miles wide. Guardian peaks watch over Diamond Lake—Mount Thielsen (9,182 ft.), a spired lightning rod on the east, and Mount Bailey (8,363 ft.), a shield volcano on the west.

John Diamond, an 1847 Irish immigrant settler at Coburg, first saw the lake in 1852 while seeking a wagon route over the Cascades. He climbed above timberline on a commanding peak and saw, due south twenty-three miles, a skyline lake. His name was given to his viewpoint, Diamond Peak (8,750 feet), and to Diamond Lake.

The genesis of Diamond Lake is tied to eruptions some 6,600 years ago of Mount Mazama, whose 4,000-foot-deep caldera (from crater rim to lake floor) holds Crater Lake. A glacier and interspersed eruptions flowed into the lake basin, and incandescent pumice and gas rushed over the caldera lip in flaming 100-mile-per hour-avalanches, some of which ran past Diamond Lake into the North Umpqua Canyon. The lake is comparatively shallow, with a mean depth of 22 feet. The beach margins are smooth shelving pumice, and summer surface temperatures reach into the seventies.

Diamond Lake is a headwater for the North Umpqua River, fed by Lake Creek whose waterfalls blocked fish from reaching the lake. In 1912, a state game warden and two U.S. Forest Service rangers placed small North Umpqua trout in five gallon cans and stocked Diamond Lake for the first time. A spawning run at the lake was noted in 1917; and ten years after the initial stocking, the Oregon Sportsman reported on the amazing trout growth, with one weighing 27½ pounds.

State Fishery Biologist Fred Locke started aquatic studies on Diamond Lake in 1941, when rainbow trout from 2 to 10 pounds were taken as a matter of course, but seeds of destruction appeared in his net sets. Some anglers were using live bait and dumping their buckets after fishing. Live bait was outlawed, but it was too late. Tui chub—sometimes called roach or trash fish—broadcast eggs in the millions around the lake edge and changed the algae balance dramatically upward by consuming the large zooplankton that grazed the algae. Bottom samples for aquatic worms and insects that dined on zooplankton dropped from 292 pounds to only 2 pounds per acre. Chub excrement further increased algae blooms by boosting the lake nutrient load. Toxic blooms of blue-green algae created a health hazard.

In 1954, to combat the problem, ODFW lowered the lake eight feet through an outlet canal with a control gate treated the lake with rotenone to eliminate all the fish. Within two years, Diamond Lake rebounded with forty years of fine trout fishing. Then tui chub reappeared in ODFW seine sets, again from illegal use of live bait. Hydro acoustic technology showed some 11 million chub, averaging 2¼ inches, present in 2002. In September 2006, liquid rotenone was applied to rid the lake of some 90 million chub. The lake revived as readily as it had after the first treatment. In 2011, ODFW reported that the lake held almost 400,000 rainbow trout with half over 16 inches. The Diamond Lake limit was raised to 8 trout per day. 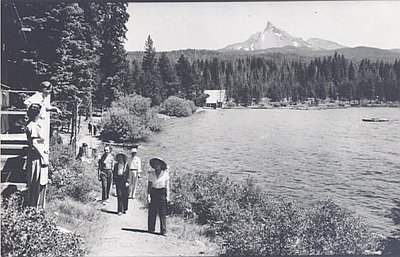 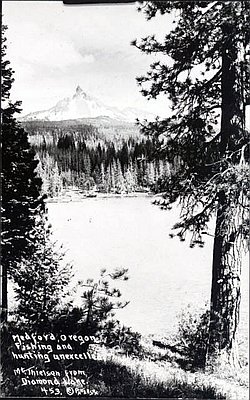 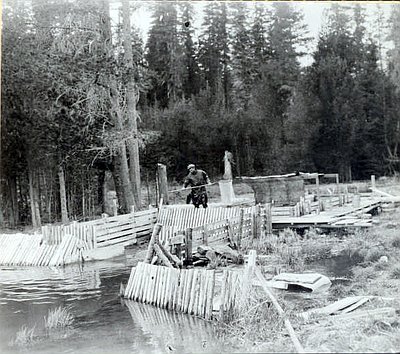