A significant figure in the years before Oregon became a state, George Law Curry served in the legislature of the Provisional Government and as governor of Oregon Territory during the period of Indian Wars and the formation of treaties. As a member of the Provisional Legislature, he was one of three signers of a legislative petition to Congress in 1848 asking that the Oregon Country be named a United States territory.

Born in Philadelphia in 1820, Curry’s parents died when he was quite young, and he was raised by his aunt and uncle. The family’s difficult financial situation led him to leave school for an apprenticeship with a jeweler, but his real interest was in journalism.

After gaining newspaper experience in Boston, Philadelphia, and St. Louis, Curry moved to Oregon in 1846 and became the editor of the Spectator, Oregon’s first newspaper. He was fired from that job in January 1848, an outcome he attributed to his refusal to allow censorship of news unfavorable to Provisional Governor George Abernethy.

In 1848, he married Chloe Boone, the daughter of Alfonso Boone, who was Daniel Boone’s grandson and the owner of Boone’s Ferry on the Willamette River. That year, he also founded the Oregon Free Press, proclaiming on June 10: “Here shall the Press the people’s rights maintain, Uncowed by influence and unbribed by gain.” He advertised himself in the paper as a jeweler.

The newspaper soon failed, as the paper’s printer decamped for the California Gold Rush, and Curry declared on December 16, 1848, that he was in a “wretched condition” of personal health. He and his wife turned to farming on a land grant south of the Willamette River, in what is now Charbonneau, and Curry embarked on a political career.

Aligning himself with Democrat Joseph Lane, the first governor of Oregon Territory, Curry was named the territory’s public printer in March 1849. While most resettlers welcomed Lane, his tenure as governor was brief, as President Zachary Taylor, a Whig, removed him and appointed John Gaines to the office. Curry moved on to the post of chief clerk of the Council—the upper house of the territorial legislature—during its 1850-1851 session. While there, he became acquainted with Asahel Bush, the chief clerk of the Assembly—the lower house—and joined the group of young men who would become the core of the territory’s Democratic Party. Their ambitious pursuit of political power led Thomas Dryer, the editor of the Oregonian, a Whig newspaper, to name them the Salem Clique.

One of the Clique’s first accomplishments was the election of Joseph Lane as delegate to Congress. Through Lane’s influence with President Franklin Pierce, a Democrat, Oregonians (as opposed to out-of-territory appointees) were appointed to various positions in the territory’s executive branch, including Curry as territorial secretary. While those appointments were welcome, Pierce’s appointment of an outsider, John Davis, as governor in December 1853 met with such opposition that Davis resigned in August 1854. As secretary, Curry stepped into the role of interim governor and was soon appointed governor.

Curry’s primary goal as governor was the settlement of southwestern and eastern Oregon in the face of Indian resistance. When white incursions into the area led to conflict, Curry repeatedly demanded federal troops and funding for local militias. Criticism of his policies in eastern newspapers inspired him to condemn the “newspaper editors of the refined east, where the chiefest danger to life arises from voluptuous living, who know the Indian character only through poetry and romance” and who had no conception of the dangers settlers faced. He added: “It is painful to conclude that the success of the whites, in repelling the attacks of the ruthless invader, was less gratifying to such mental organizations than would have been the depopulation of both territories by Indian conquest."

In his role as territorial governor, Curry earned support through his careful respect for the elected legislature and its prerogatives. He encouraged the efforts to win statehood for Oregon and, when it was achieved, was succeeded by newly elected governor John Whiteaker. After Curry narrowly missed being elected a U.S. senator in 1860, he returned to the newspaper business as editor of the Portland Advertiser, one of several Oregon newspapers suppressed by the federal government for suspected opposition to the Civil War.

Curry sold his farm in 1874 and moved to Portland, where he died in 1878. He was buried in Lone Fir Cemetery. Oregon's Curry County was named for him in 1855. 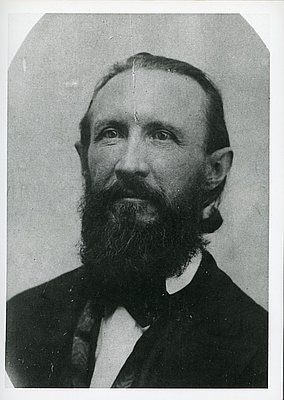 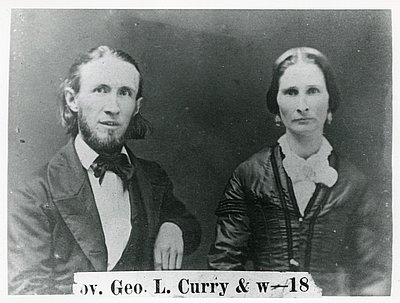 Oregon's pioneer newspapers were also political organs, advancing their cause in news articles as well as editorials. The most prominent advocates were Asahel Bush of the Oregon Statesman (Salem) and T.J. Dryer of the Oregonian (Portland), Democrat and Whig, respectively. But as the nation entered the Civil War and demands …