For eighty years, Crown Mills, known as Centennial Mills after 1949, was one of the largest producers of flour and milled grain in the Pacific Northwest. The original mill was built in 1910 on a site adjacent to the Willamette River in Portland, facing what is now Northwest Naito Parkway at the foot of Pettygrove Street.

Balfour-Guthrie and Company, a San Francisco-based American branch of a large shipping and investment company based in Liverpool, England, had extensive investments in the eastern Oregon and Washington wheat trade. By 1890, the company owned more than seventy warehouses in Portland, with wharves and storage facilities on the Columbia River. Balfour-Guthrie financed and insured wheat growers, operated silos and barges, and shipped grain through Portland and Tacoma to a world market. Seeing an opportunity to increase profits, the company built Crown Mills and began to market Crown Flour in Oregon, while also shipping flour to Europe, Asia, and South America.

San Francisco-based engineer Leland S. Rosener was responsible for the original design of the mill, which cost $250,000 to construct. The six-story concrete flour mill and the stacked timber crib Elevator A were completed in early 1911, and the first flour shipped out in June of that year. Together with other large mills in Portland, Crown was a major factor in the arrival of what was known as the Wheat Fleet—ocean-going vessels, mostly sail powered. Grain was Oregon’s chief export in the early twentieth century, with more than a hundred grain ships arriving in the months after harvest. The Wheat Fleet shipped both grain and processed flour to England, South America, Japan, and other Asian ports.

Barely a year after it opened, the flour mill was seriously damaged by a fire. The upper floors of the building—out of the reach of Portland’s George H. Williams fireboat and beyond the capacity of its under-pressured sprinkler system—were gutted. But the building survived and was quickly rebuilt, with a huge wood-stave (later steel) water tank atop the roof to help protect it. The water tank and the Crown Flour sign in ten-foot tall letters on the roof were well-known features on the waterfront. By the end of World War I, Crown Mills employed between 110 and 120 workers and operated around the clock.

During the mid-1920s, Crown Mills continued to expand its operations, building warehouses and grain elevators to handle daily production that grew to more than twelve thousand bushels. In 1928, the company built a mill to produce animal feed and added grain elevators. Local retail flour sales were supported by Mrs. L.A. Humphreys, who taught baking classes, offered recipe booklets, and helped promote Crown Flour as “absolutely pure and wholesome.” A fleet of trucks delivered products to stores, restaurants, and commercial bakeries in the region.

The Great Depression created challenges for Balfour-Guthrie, and the stability of Crown Mills proved a major asset to the firm’s financial survival during the 1930s. After World War II, based on the predicted increase in competition in the flour market and the need for major investment in the mill (which was still relying on 1910-era equipment), Balfour-Guthrie sold its Portland facility to one of the largest milling operations in the West, Centennial Flouring Mills of Tacoma, Washington. Centennial improved the facility with new equipment and facilities in 1962. A series of corporate restructurings ended in 1981, when Archer-Daniels Midland purchased the Portland mill. Outdated, the plant required major upgrades to remain competitive, and ADM ceased all production in the late 1990s.

The Portland Development Commission purchased the Centennial Mills property in 2000, and Warehouse E was remodeled and repurposed for the Portland Mounted Police. After a lengthy public process, most of the remaining buildings, in very poor condition and beyond repair, were razed in 2015-2016. The six-story concrete flour mill remains, awaiting rehabilitation as part of a planned redevelopment. 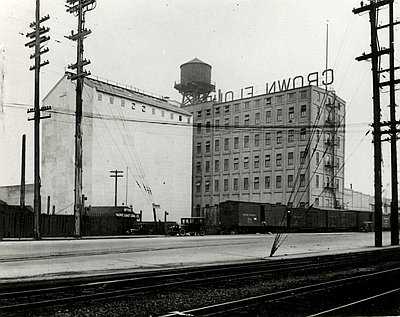 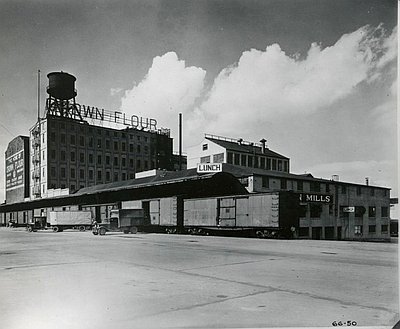 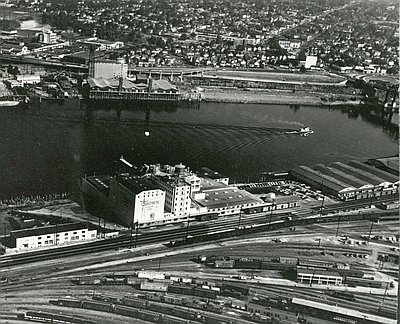 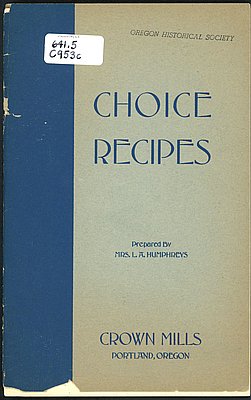 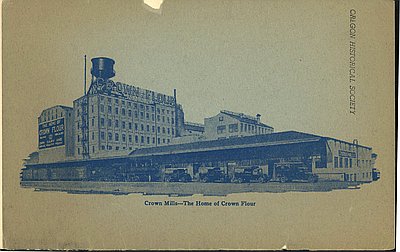 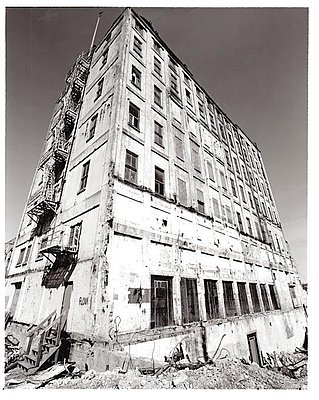 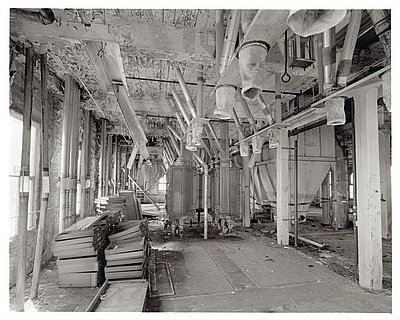 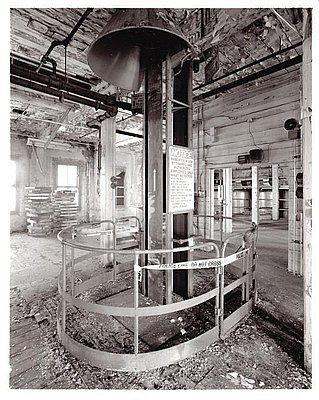 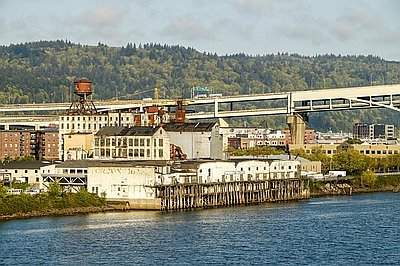 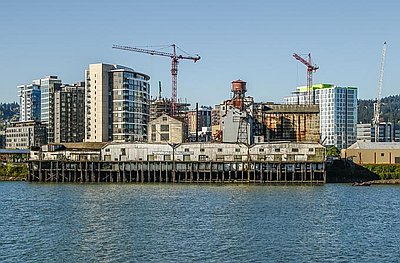 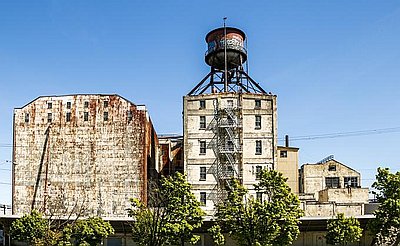 Bernard (or Bernhard) Albers emigrated from Lingen, Germany, to Indiana in 1887 and moved to Portland two years later to work as a driver for a feed merchant company—a business he had trained for with his father. At the time, wheat and flour were two of Oregon’s largest and most …

In the early months of 1847, a group of Willamette Valley farmers organized the Oregon Producers’ Exporting and Importing Company (OPEIC). The farmers wanted to create their own export company so they would not be at the mercy of the Hudson's Bay Company (HBC) and what they believed were unfair …

Thompson’s Mills, the oldest existing water-powered grain mill in Oregon, hugs the Calapooia River about two miles east of Shedd in Linn County. In 2004, the Oregon Parks and Recreation bought the mill and opened it to the public because "the mill, its associated buildings and water features present OPRD …