The museum’s collections include more than 40,000 artifacts, including an extensive assemblage of Coos and Coquille basketry, and more than 200,000 images, including the Victor C. West Maritime Collection. Tribal members advise on exhibits involving traditional tribal culture; and collections are managed by professional staff, who also provide assistance to smaller area museums. As of 2009, museum school programs served 1,300 students a year from every school district in Coos County.

CCHS was founded on November 5, 1891, originally to preserve the historical record of the EuroAmerican community on the south coast. Society members assembled biographies and information about the new settlers and native peoples, which were published in 1898 as A Pioneer History of Coos and Curry Counties. The book is a standard reference for the earliest days of white settlement in the area.

In 1947, CCHS opened its first museum in Coquille, featuring donated artifacts of tribal and European cultures. The small, unheated building was distant from major roads and was open just once a week. Fire damaged the structure in 1952, and the City of North Bend offered a new site in then-popular Simpson Park on Highway 101. CCHS volunteers constructed a cement-block structure there, which opened in January 1958 as the Coos-Curry Museum. Curry County later created its own historical society and museum.

By 2000, museum space needs and public services far exceeded the capacity of the building. The City of Coos Bay offered CCHS a 3.5-acre site on the waterfront next to Highway 101 and adjacent to historic Front Street. The site provided access to the highway, high visibility, room for expansion, and the opportunity to reinvigorate formerly industrial waterfront and attract new users. It was ideal for a new Coos Historical & Maritime Center complex. In addition to exhibits and storage for museum collections, the project, when completed, will support collaborative cultural activities and events. Its large outdoor waterfront plaza, research archive, meeting spaces, and classrooms will serve the needs of diverse users. 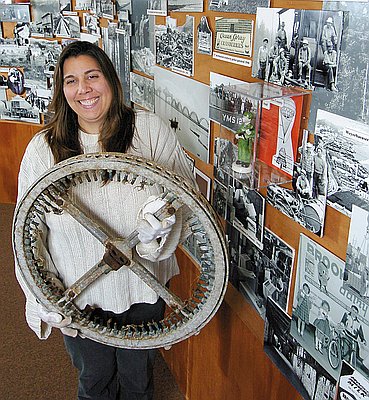