Colwood National Golf Course in Northeast Portland, originally named Meadowbrook Golf Course, was established as an eighteen-hole private course in 1930. The growth of golf between 1910 and 1930 was unparalleled in American outdoor sports, and there had been a significant increase in the number of weekend golfers in the 1920s. By 1930, the country had over 5,000 courses, 543 of them public or municipal courses, and over two million people were playing the game. By the time Meadowbrook Golf Course was built, the Portland area had seventeen courses.

Built on reclaimed land near the Columbia River Slough, Meadowbrook was designed and built during what was known as the Golden Age of golf design. Portland landscape architect George H. Otten (1889-1978) and regional designer Arthur Vernon Macan (1882-1964) created the plans. Otten, who had worked and studied in New York City under landscape architect Feruccio Vitale, had designed residential estates, parks, and golf courses in Portland, including Alderwood Country Club, Rose City Golf Course, and Lloyd Golf Course. Macan, an Irish immigrant who lived in Victoria, British Columbia, had designed more than sixty golf courses in the Pacific Northwest, including the fairways at Columbia Edgewater and Alderwood Country Club in Portland. His designs often integrated fairways and greens with natural terrain features, which was considered innovative at the time. His design principles were based on strategic interest and challenge rather than the prevailing concept of an expanse of featureless greens. The clubhouse, built in 1931 in the Colonial Revival style, was designed by the Portland architectural firm of Thomas and Mercier.

James P. Maginnis, the organizer and manager of Meadowbrook, recruited over 250 contributors to fund construction. Once the course was established, many early members were from the northeast Portland neighborhoods of Alameda, Rose City, and Irvington. By 1932, however, because of financial difficulties, Meadowbrook had filed for bankruptcy and the course had become public under a new name, Colwood Golf Course.

One of the first golf professionals at Colwood was Elmer Holland, a popular instructor who planned the first annual club championship that was open to players who were members of the Oregon Public Links Golf Association. The association had formed in 1931 for public team and tournament play, and one of its first meetings was at Colwood. By 1940, Colwood was hosting the Cornfoot Tournament. A War Industries Golf League met there during World War II.

By the mid-1930s, an Oregon Women’s Public Links Golf Association had formed. Women golfers had a sweepstakes at the course, and they routinely held Tin Whistle tournaments. The Tin Whistles had been founded in 1904 in North Carolina to promote the tradition and standards of sportsmanship and the spirit of good fellowship through golf.

In 1955, Cecil Saunders and his son William Saunders purchased a controlling interest in the property. Joined by Alex Waterhouse in the early 1960s, they founded National Golf Courses, a corporation that manages regional golf courses. They changed the name of the course to Colwood National Golf Course to reflect the corporate name.

The first remodel of the Colwood Clubhouse was completed in 1961 by Wolf Zimmer Architects in Portland. The building was remodeled again in 1964, when a major façade was redesigned and a banquet room was added by Portland architectural designer Charlotte J. Olson. Parts of the Colonial Revival building, including dormers and windows, were stripped from the façade and elsewhere, which gave the building a horizontal, planar appearance under the dominant gable forms. The most significant changes were the addition of a covered walkway supported by square brick columns that visually tie the old and new sections together and the addition of an expanse of windows for viewing the grounds.

In 1963, Colwood established one of the first golf schools for women in the country. Golf pro Ed Vanderberg and Ed Neiderkorn, a promotion representative from the Oregonian, came up with the idea. Colwood began giving lessons for women, and over five hundred people signed up during the first year. With the increase in the number of women players and the new facilities, the clubhouse catered to luncheons and weekend cocktails in the lounge.

Colwood Golf Course closed in 2014 for redevelopment as an industrial complex, park, and nine-hole, par-three course with a turf driving range and a pro shop. The clubhouse is now a restaurant with banquet facilities. 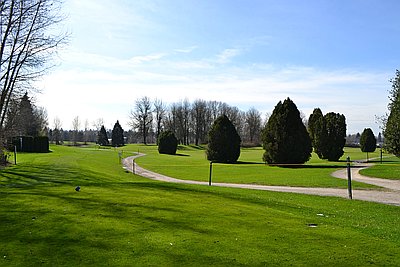 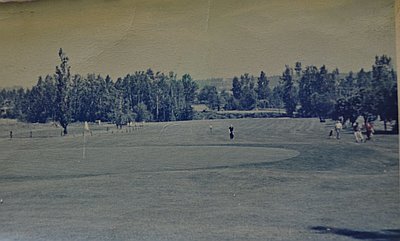 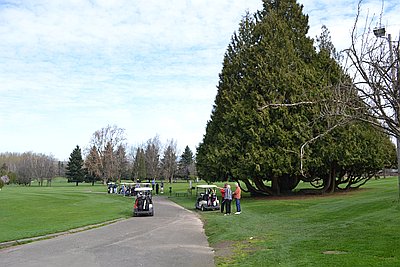 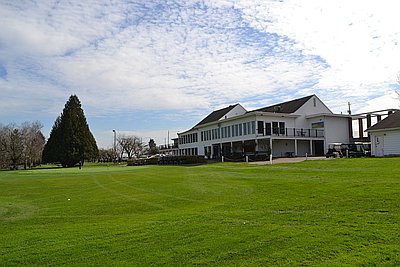 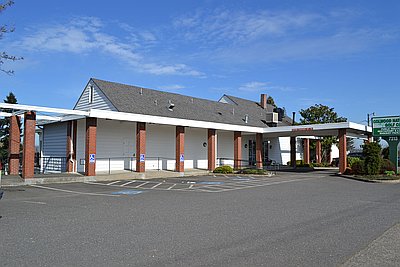 Golf in Portland and Oregon. Issued by the Advertising and Promotion Committee of the Portland Chamber of Commerce, 1930. Oregon Historical Society Research Library, Portland, Oregon.