Alameda is a neighborhood in northeast Portland, platted in 1909 by developers and marketed as an exclusive district. The early restrictions banned all but Caucasian residents, set minimum home construction costs, and permitted solely residential uses. The original plat, known as Alameda Park, is bounded by Northeast Fremont and Prescott Streets on the south and north and by Northeast Twenty-first and Thirty-third Avenues on the west and east. Today, the Alameda neighborhood extends south of Northeast Fremont to Northeast Knott and is adjacent to the Irvington District. The area is bisected by the Alameda Ridge, a geologic formation consisting of gravels deposited during the Glacial Lake Missoula floods between 13,000 and 15,000 years ago.

Taking its name from the Spanish word for a tree-lined promenade, Alameda Park was developed by the Alameda Land Company, a group of Astoria-based businessmen. Company President Edward Zest Ferguson was a third-generation Astorian known as a shrewd investor in timberland and real estate. Other corporate officers and investors included Harry Hamblet, John Bryce, and William Dunckley, all of whom have neighborhood streets named for them.

The Lewis and Clark Exposition held in Portland in 1905 sparked an interest in the city and led to a population and real estate boom in the area. Sensing opportunity, the Alameda Land Company purchased 40 acres of open land that was part of the 1859 William and Isabella Bowering Donation Land Claim. The purchased land included a working dairy, orchards, burned timberlands, and at least one Native trail that transited the area on its way to the Columbia River. At least one Chinook village—known as Neerchokikoo—was just north of today's Alameda neighborhood.

In the early years of the twentieth century, other close-in orchards, farms, and forests were bought up by real estate speculators such as Ferguson and gridded with gravel streets and lots in preparation for home construction. At the same time, Portland’s streetcar system was expanding, making it possible for residents who lived outside the city’s core to commute to work. Alameda is one of more than a dozen eastside neighborhoods that functioned as a bedroom community connected to downtown Portland by streetcar. When the first home was built in Alameda in 1910, only 3,500 autos were registered in the State of Oregon, and streetcars were the primary mode of local transportation.

Early newspaper advertisements enticed buyers to visit Alameda and extolled the virtues of the Broadway Streetcar, which could transport people between the newly platted neighborhood and the Portland business district in fifteen minutes. In 1910–1911, the Alameda Land Company paid the Portland Railway, Light and Power Company more than $60,000 to extend the streetcar tracks up Northeast Regents Street to the geographic center of the district at Northeast Twenty-ninth Avenue and Mason Street, making even more lots accessible and attractive to buyers.

Home construction boomed during the 1910s and 1920s, with architectural styles ranging from Arts and Crafts and Craftsman to Tudor Revival and English Cottage. Many of the homes along the ridge were custom-designed and were built with live-in quarters for nannies, maids, and gardeners. As of 2019, five Alameda homes had been placed on the National Register of Historic Places.

Local activism, led by neighborhood women—including the Alameda Tuesday Club, a social club founded in 1912—led to the construction of the Alameda Elementary School in 1922. The school has been in continuous operation since. Alameda’s deed restrictions expired in the 1920s, though discriminatory lending and real estate practices persisted across Portland for many years. In the 1920s, Alameda residents protested planned commercial development in the neighborhood and petitioned the City Council to stop the construction of a church.

From the 1950s until the mid-1980s, some eastside neighborhoods declined due to disinvestment and demographic and economic changes resulting from inequity and discrimination, but Alameda retained its value. As older residents moved out of the neighborhood during this period, younger residents—primarily younger, white, middle-class families—invested in and fixed up properties.

The 2010 census for the Alameda neighborhood shows 5,037 residents living in just over 2,000 homes. Almost 94 percent of residents are white, with 23 percent younger than eighteen, 68 percent between the ages of eighteen and sixty-five, and 9 percent older than 65. There is a small commercial district at the intersection of Northeast Twenty-fourth and Fremont. 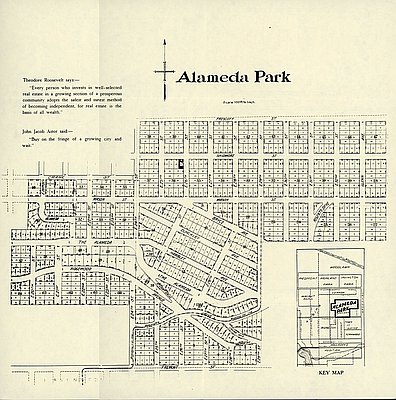 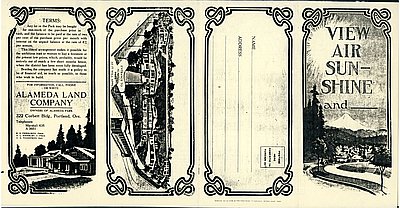 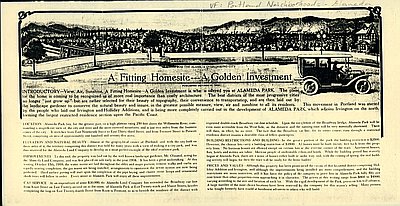 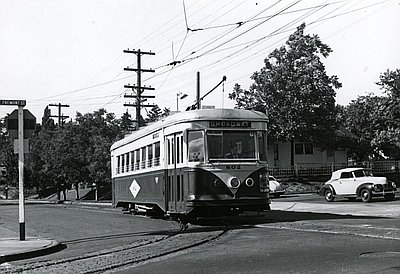 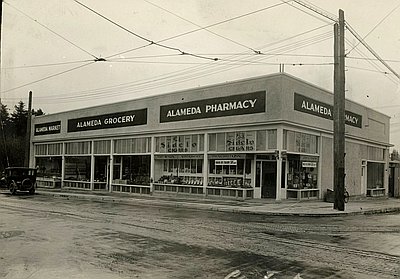 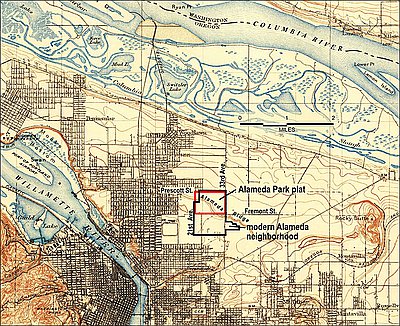 The majority of Portland’s oldest neighborhoods owe their location and growth to the development of street railways. The pattern displayed on modern maps still reflects the pioneering streetcar lines radiating from downtown; Portland's Irvington Neighborhood is renowned for being an exemplar of a classic early twentieth century "streetcar suburb."