The Coin Machine Men of Oregon was a statewide trade association of pinball and other coin-machine operators and distributors created in the 1930s with its headquarters in Portland. In March 1955, the Coin Machine Men signed an agreement to join the International Brotherhood of Teamsters to unionize the coin-machine industry in Oregon.

The unionization of the Coin Machine Men, however, was controversial. By 1955, the Coin Machine Men had come under the control of Portland vice racketeer James Elkins and Washington vice racketeers Joseph McLaughlin and Thomas Maloney, who were closely aligned with Teamsters Union officials. By controlling the Coin Machine Men, the Teamsters controlled the operation and distribution of coin-operated machines, which included illegal gambling machines, such as slot and other machines that paid winners cash prizes. The Teamsters, therefore, controlled the illegal gambling machine industry in Oregon.

In April 1956, a Portland Oregonian exposé, written by investigative reporters Wallace Turner and William Lambert, highlighted the relationship between the Coin Machine Men of Oregon and the vice racketeers. In fact, the information Turner and Lambert used for the riveting reports came from Coin Machine Men leader and racketeer James Elkins. By February 1956, Elkins feared that the Teamsters were about to cut him out of the gambling rackets, or worse, kill him for not following their orders and failing to deliver a lucrative land deal. These reports of labor racketeering in Portland, and similar reports from around the country, inspired powerful leaders in the U.S. Senate, particularly Senator John McClellan (D-Arkansas), Chairman of the Senate Committee on Investigations, and his Chief Counsel Robert Kennedy, to investigate racketeering by union officials in many U.S. cities, especially Portland.

Evidence uncovered by the senate investigation convinced Congress to pass the Labor-Management Reporting and Disclosure Act, which created a "bill of rights" for members of labor unions. Evidence from the hearings was also used to convict Teamsters Union President Dave Beck of grand larceny. Federal investigators concluded that Beck used union funds for personal expenses. 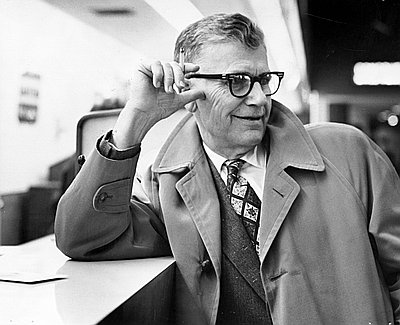 Portland's notorious history of racketeering played a role in the creation of the U.S. Senate Select Committee on Improper Activities in the Labor or Management Field, commonly called "The McClellan Committee." Initiated by the U.S. Senate on January 30, 1957, the committee's work helped to explain the dynamic of labor …