Coalcas Pillar is a rock formation—an eroded basalt plug—located on a bluff overlooking the Willamette River about five miles south of Oregon City. Somewhat mushroom-shaped, about thirty feet in height, and often inaccurately described as a “balancing rock,” the pillar has long been a landmark for travelers along the river. It is visible from the railroad and from Oregon Route 99E, although it is now often screened by foliage. There is currently no public access to the pillar, which is on land owned by the Oregon Department of Transportation.

The earliest reference to the name Coalcas Pillar appears in the Oregon City Enterprise in 1897, where it is rendered as Coolca’s Pillar. The article relates what it calls a “romantic and pathetic” legend of Coolca, a Molalla chief who loved Nawalla, the daughter of Chelko, a Clackamas chief. Rejected by both Nawalla and her father, Coolca kidnaps the girl, but she dies of a broken heart. Chelko and his warriors drive Coolca from the top of the bluff, and the pillar remains as a reminder of the events. Two other versions of the legend appear in Vera Martin Lynch’s Free Land for Free Men: A Story of Clackamas County (1973).

The legend was retold as Coalca’s Pillar [sic] in the March 1900 issue of Sunset magazine, published by the Southern Pacific Company, shortly before the railroad opened Coalca station below the bluff on which the pillar stands. The station, established on July 22, 1900, served the sawmill and veneer plant of the Doernbecher Manufacturing Company, a Portland furniture maker.

Coalcas Pillar became a popular destination for hikers. From the 1910s into the 1950s, the Mazamas, a local climbing and hiking club, frequently arranged day trips from Portland to Canemah by interurban train and then hiked to the pillar. Like a number of other distinctive basalt formations in Oregon, Coalca’s Pillar was a popular subject for postcard views in the early twentieth century. 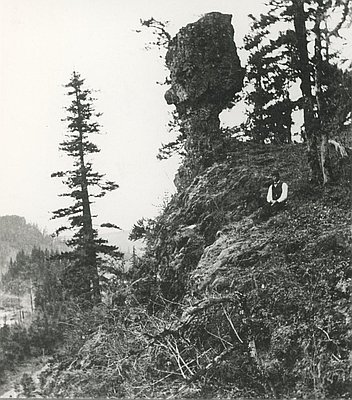 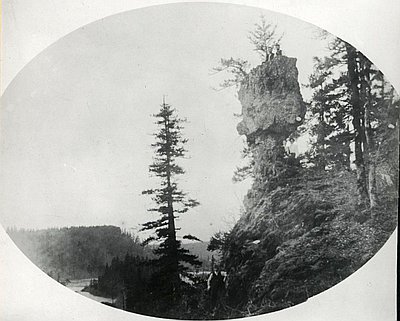 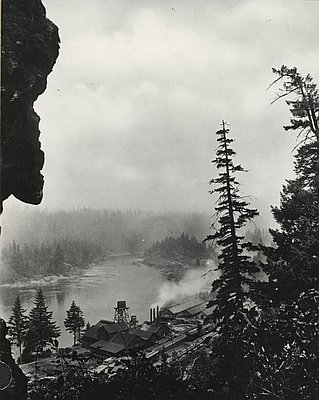 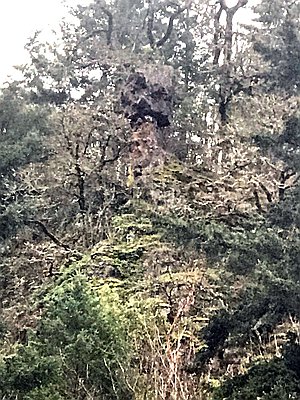