For three decades, one of the best known and quirkiest Portland tourist attractions was the 24 Hour Church of Elvis. The creation of artist Stephanie Pierce in the mid-1980s, the sidewalk-facing exhibit helped establish Portland as the home of the weird and the offbeat.

Pierce moved to Portland to become an artist after earning a law degree from Georgetown Law School (1980) and practicing corporate law for three years with AT&T. In 1985, she leased a 10,000-square-foot space at 1109 Southwest Washington Street in downtown Portland for an art gallery called Where's the ART!! It was there that she created, in a window facing the street, what she said was the first 24-hour, coin-operated art gallery—a whirring and spinning machine that dispensed messages.

About a year later, Pierce moved Where's the ART!! to 219 Southwest Ankeny Street, where she recreated the window, which, at the suggestion of two high school students, featured the 24 Hour Church of Elvis. For a quarter, visitors could hear a sermon by Elvis, confess their sins, receive the Elvis catechism, or get a photo with the King of Rock and Roll. Pierce also offered Elvis-themed wedding services, including legal weddings for $25, novelty weddings for $5, and coin-operated weddings for $1. In 1990, an Illinois radio station awarded an all-expenses paid trip to a Chicago couple to be married at the 24 Hour Church of Elvis. The ceremony was broadcast live to thousands of drive-time Chicago listeners.

Pierce was adept at garnering publicity for her gallery, and during the late 1980s and early 1990s the 24 Hour Church of Elvis became well known. In addition to articles in the Oregonian, the exhibit window was featured in the Wall Street Journal and the Los Angeles Times. Jay Leno from The Tonight Show paid a visit in 1995. The publicity attracted both American and international visitors, but even at the height of its fame it did not make enough money to pay the rent and support its creator. In 1992, Pierce created her own "biosphere" and lived in the window of Where's the ART!! where she asked for $3 donations.

In 1994, Pierce moved Where's the ART!! to an upper floor of 720 Southwest Ankeny, where it was impossible to install the coin-operated window exhibit. Instead, she created an Elvis museum space, where she served as the guide and sold Church of Elvis t-shirts and other merchandise. In January 2002, an eviction notice forced her to close the attraction again, although the 24 Hour Church of Elvis continued to be featured in many tourist guides.

After a six-year hiatus, Pierce announced that the 24 Hour Church of Elvis would reopen in a storefront window at 408 Northwest Couch Street. By August 2009, a new exhibit was operating using two of the Commodore 64 computers from the original coin-operated display. This incarnation lasted until March 2013, when the window was boarded up.

The struggles and demise of the 24 Hour Church of Elvis were much lamented. "The church flamed out faster than a hunka, hunka burnin' love,” the Oregonian's Steve Woodward wrote in a story about a tourist who was "all shook up" after coming all the way from Tampa, Florida, to visit the church only to find it closed. Karl Samson, author of Frommer's Portable Portland, described it as “just plain unique." 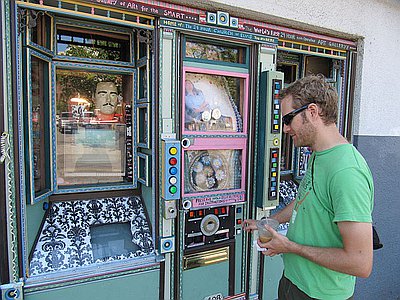 Voodoo Doughnut is an independently owned business in Portland and Eugene known for its off-kilter concoctions and unusual business philosophies. Owners Kenneth “Cat Daddy” Pogson and Tres Shannon opened the flagship store in 2003 on Southwest Third Avenue in Old Town Portland. A second store, Voodoo Doughnut Too, is located …