Chief Halito, commonly shortened to Chief Halo (meaning “having little” or “needing little”), was leader of the Yoncalla Kalapuya tribe and was married to Du-Ni-Wi, one of several wives. He remained on the Applegate family donation land claim in the Umpqua Valley after removal of other tribes to reservations. Despite the dangers of the Rogue River war south of the Umpqua Valley, the death of so many Native people, and the acts of racism and efforts to exterminate the tribes by volunteer militia, Halo chose to remain in his traditional lands. Halo and his family were prominent people in the community of Yoncalla and for generations were friends with the Applegate family.

The Yoncalla are the southernmost of the many Kalapuya tribes, living south of the Calapooia Mountains in western Oregon in the Umpqua Valley on the Upper Umpqua River. They shared the valley with the Cow Creek Band of Umpqua at the south and the Molala in the Cascades to the east. The Yoncalla were prominent near Fort Umpqua, and they encountered white explorers, including the U.S. Exploring Expedition in 1841, and fur trappers such as those working for the Hudson’s Bay Company beginning in 1824.

In 1848, the Applegate family moved to Yoncalla from their first settlement at Salt Creek, near Rickreall, and began a lifelong friendship with the family of Chief Halo. The Yoncalla chiefs signed the Treaty with the Umpqua and Kalapuya with the U.S. government on November 29, 1854, and the tribes removed to the temporary Umpqua Reservation, west of Roseburg. The Halo family remained near the Applegate homestead in Yoncalla.

In January 1856, Superintendent of Indian Affairs Joel Palmer began removal proceedings to the permanent Grand Ronde Reservation in the Coast Range, about twenty miles inland from present-day Lincoln City. He began with the Kalapuyans. Jesse Applegate later wrote that Halo refused to go to the reservation, saying, “I will not go to a strange land.” Charles Applegate reportedly came to his defense and offered to allow the family to remain on his land claim. Halo and his family remained in Yoncalla, where the Applegates built a house for them.

Halo had a Native name, Cam-a-phee-ma, which in Yoncalla Kalapuya means “fern.” When asked to choose an American surname so that he could receive a land allotment, he chose Fearn. Chief Halo and his sons, the Fearn brothers—Mack, Jake, and Sam (Be-el)—lived for a short time on the Grand Ronde Reservation, but by 1891 they had returned to the Umpqua Valley, where they took up off-reservation allotments in 1892.

In the 1860s, Chief Halo went into business with a local settler, John Walker, who would later found the short-lived town of Walker. They built a fish trap on the Row River, four miles east of Cottage Grove, where they alternated days to clear the trap of salmon, trout, and eels. Chief Halo remained active until his death in 1892. He is estimated to have been at least seventy years old.

The long-term relationship between the Halo and Applegate descendants is honored in works of art, cultural projects, and events. Halo’s name is preserved at the sacred Halo Rock, also known as Splachta Alla in the Yoncalla language, near the site of the presettlement Yoncalla village, and in Halo Creek in Lane County. 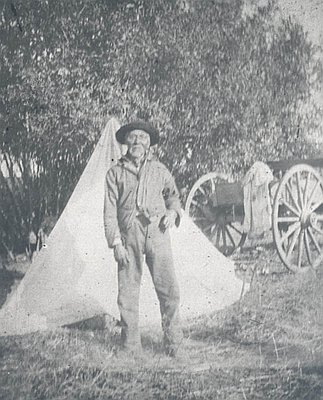