The C.E. Gordon House, now located in the Oregon Garden near Silverton, was once on a secluded farm on the Willamette River, twenty miles south of Portland. Planned for comfortable and efficient living, the compact house, designed in 1957 by Frank Lloyd Wright (1867-1959) for Conrad and Evelyn Gordon, was constructed of concrete block and cedar with generous areas of glazed, transparent wall space that brought natural light and external views to the interior. Through its rescue and relocation, it has become one of the most famous houses in Oregon. The house was listed on the National Register of Historic Places in 2004.

With encouragement from the Chicago-based Frank Lloyd Wright Building Conservancy, the house was dismantled in 2001 and moved to the outskirts of Silverton, where it was scrupulously restored, even to its original compass orientation, the following year. The attraction is maintained for the City of Silverton by the nonprofit Gordon House Conservancy and is open to the public for tours and events.

The Gordon House is the only building Frank Lloyd Wright designed in Oregon. After deferring construction for six years, Conrad and Evelyn Gordon completed the house in 1964, a few years after Wright’s death. The project was supervised by Burton J. Goodrich, a former apprentice to Wright who had been practicing in Oregon since 1948.

The Gordon House belongs to a category of modest, low-cost houses that Wright called Usonian. The concept, which the architect developed beginning in 1936, was a versatile, standardized house plan that could be adapted to the requirements of Americans of moderate means. Without sacrificing his core architectural principle—harmony among building form and function, building site, and natural materials—Wright achieved economy in Usonian houses by reducing scale and simplifying the construction process.

A novel feature of Usonian houses was what Wright called the “floor mat,” a platform foundation consisting of a four-inch concrete slab laid on a bed of gravel that contained hot-water heating pipes. The surface of the floor mat was scored with the modular grid that governed the building’s proportions. The houses also had a carport—a simple, flat canopy that spared the expense of a fully-enclosed garage.

The C.E. Gordon House is an exemplary small Usonian. It is T-shaped in plan with a kitchen “work space,” a home office, a master bedroom, and two upstairs bedrooms in the head of the T; the stem is an airy one-and-a-half-story multi-use “great room” that combines a dining alcove and living area with a fireplace and library alcove. Ground-story piers and walls are constructed of concrete blocks, and ranks of floor-to-ceiling glazed doors open onto terraces on the east and west. The dominant horizontal lines of the house exterior are created by flat roofs with broadly projecting trellis overhangs and horizontal cedar siding that wraps the upper story and cantilevered balconies.

The interior paneling is made of western red cedar, and windows are screened by light-filtering grille work composed of pierced boards, the bottom edges of which are tapered at a 15-degree angle. Where it was necessary to leave behind building fabric of the Gordon House at the original site—for example, the broad fireplace chimney block and concrete floor mat—the effects and details were recreated during restoration. The Gordon House is one of four post-war Usonians in the Pacific Northwest designed by Wright; the other three are located in Washington. 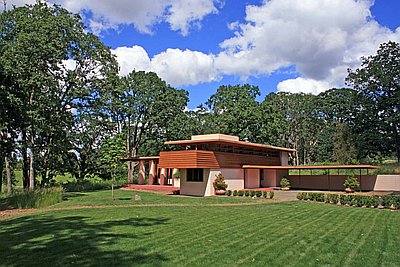 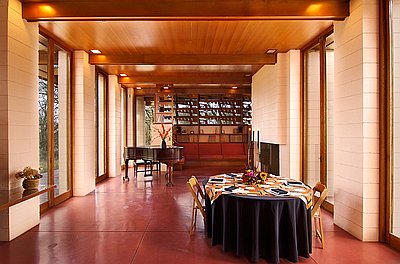 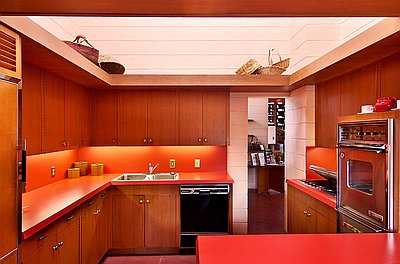 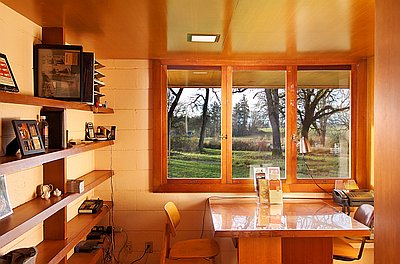 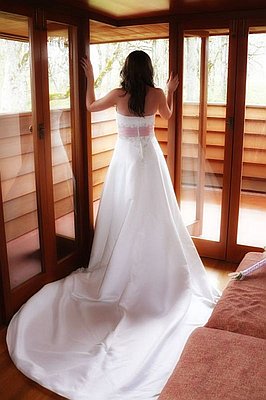