John Ball spent just one of his eighty-nine years in Oregon but has been widely recognized as the first school teacher in the Oregon Country. He also made some interesting observations about Oregon in his letters and reminiscences.

Ball was born to a farming couple in Grafton County, New Hampshire, the youngest of ten children. He graduated from Dartmouth College at the age of twenty-five and then moved to New York, where he taught school and studied law before becoming an attorney and helping to operate his sister's oil-cloth factory. In 1832, in his late thirties, he decided to "take a little recreation" by joining Nathaniel Wyeth's cross-country journey to Oregon, remembering the stories of John Ordway, a New Hampshire neighbor, who had been part of the Lewis and Clark Expedition.

Wyeth's enterprise did not go well. During a difficult journey that lasted from March through October 1832, Ball recorded desertions, hunger and thirst, and the loss of critical equipment. Wyeth, whom Ball described as "a man not easily diverted by the advice of others," had aspired to run the Hudson's Bay Company out of business once in Oregon. He instead found himself and the remnant of his party dependent on John McLoughlin's hospitality at Fort Vancouver. Ball decided to stay there, and McLoughlin asked him to teach the dozen or so métis (children of white fathers and Indian mothers) boys at the fort. Ball "found the boys docile and attentive, and they made good progress." He also quoted McLoughlin as noting that "you will have the reputation of teaching the first Academy in Oregon."

Using implements and seed loaned him by McLoughlin, Ball took up farming the following spring, moving south to French Prairie, where several families who had retired from the fur trade resided. He spent three months boarding with J. B. Desportes, "whose family consisted of two wives, besides one absent, by all seven children, four or five slaves and two or three hired Indians, besides cats and dogs without number." He and another survivor of the Wyeth expedition planted and harvested a crop of potatoes and wheat. Both men struggled with illness. Ball became lonely and described his new home as "a country of falsehood and low cunning." In late 1833, he traded his harvested crop for passage on a ship bound for San Francisco Bay and the Sandwich Islands, and eventually reached Norfolk, Virginia. He reported that he missed Oregon's scenery more than its populace: "The grandeur of these beautiful mountains, Hood and Jefferson, . . . as seen from the fort and my farm, were the hardest to leave."

After practicing law in Virginia for two years, Ball moved to Michigan, where he speculated in land, practiced law, married, and became a prominent citizen and advocate of public education in Grand Rapids. He traveled widely in the United States and Europe. 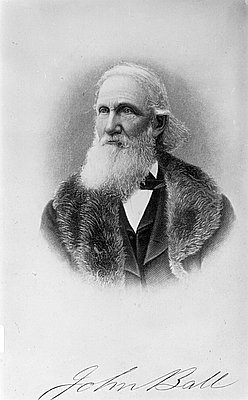