Athena, in Umatilla County, is a small agricultural town situated on historical transportation routes: the route of the Oregon Trail, which went to the Whitman mission (1841 to 1847); the wagon road between Umatilla and Walla Walla, Washington (late 1860s); and the Oregon Railway & Navigation Company railroad (after 1883). Today, the town is on Oregon Highway 11.

The first non-Indian who lived in the area was Darwin A. Richards, who settled on 200 acres near Wildhorse Creek in 1866. Richards operated a stagecoach station and a private postal service known as Richards Station. Others began settling in the area, and Richards laid out a four-block townsite that he named Bellview.

In 1878, Thomas J. Kirk platted a larger town that he named Centerville because it was halfway between Pendleton and Walla Walla. The first post office was established at Centerville in October 1878. A decade later, the name was changed because there were towns named Centerville in western Oregon and in Washington. D.W. Jarvis, the school superintendent, suggested the name Athena for the Greek goddess of counsel, war, arts, and industries. The new name was adopted in May 1889.

Today, Athena is known for the Caledonian Games, an annual event first held in 1899 to celebrate Scottish traditions and clans. The games, which were suspended in 1914 and revived in 1976, are held the second full weekend in July. The population of Athena was estimated at 1,142 in 2018. 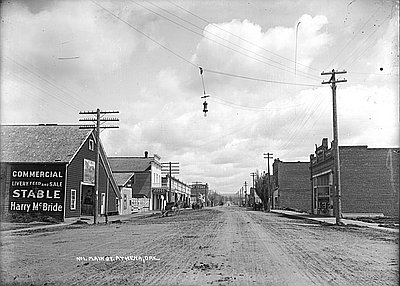 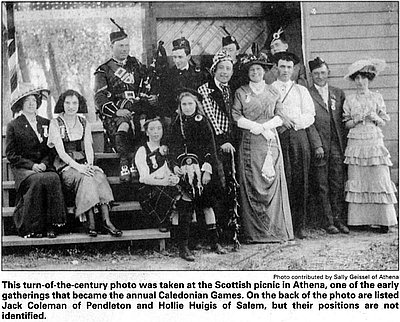 Adams is a small town about thirteen miles northeast of Pendleton on Wildhorse Creek in Umatilla County. The town got its name from the homestead of John F. Adams, which became part of the town. The federal government established a post office in Adams in 1883, and the first postmaster was …