The approximately sixty-mile-long Applegate River is one of three northward-flowing main tributaries of the Rogue River (the others are the Illinois River to the west and Bear Creek to the east). Although the headwaters of the river's main stem, the Middle Fork, are nearly ten miles into Siskiyou County, California, on the northern slopes of the crest of the Siskiyou Mountains, most of its upper watershed lies within Jackson County. The lower portion of the river flows through Josephine County, where it joins the Rogue about five miles downstream from Grants Pass.

Named for Oregon pioneer Lindsay Applegate, who encountered the river during his 1848 trip south to the California goldfields, the Applegate River was subjected to intensive, large-scale placer gold mining from the 1850s to the 1890s. Mining and later irrigation withdrawals have adversely affected the stream's anadromous fishery, but the lower river still draws winter steelhead anglers. In 2008, efforts are underway to reduce barriers to fish passage and improve salmon-spawning habitat.

The Applegate Valley—long a sleepy, rural area located off the region's main travel routes—supported small farms, ranches, and sawmill communities until well after World War II. The mountainous watershed's occasional propensity for extreme high-volume flows and destructive winter floods led the Army Corps of Engineers to construct, in 1979-1981, the Applegate Dam as part of its Rogue Basin flood-control project. The scenic Applegate Valley's popularity has grown significantly since that time, with a steady influx of new residents building large homes on wooded ten-to-twenty-acre parcels and the development of vineyards and wineries. 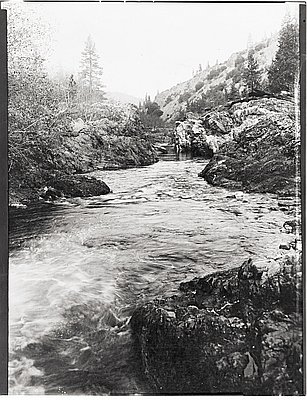 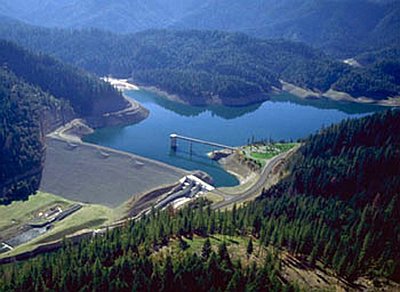 The Charles and Melinda Applegate House in Yoncalla is the oldest known residence in Oregon that has remained in continuous family ownership since its construction. As one of the most authentic of Oregon’s remaining pioneer houses, it was listed in the National Register of Historic Places in 1974. The house, …

Elmer Ivan Applegate was an important early Oregon botanist best known for his monograph of trout lilies (Erythronium) and for his role in organizing the Klamath Irrigation District. He was born near Ashland, March 31, 1867, of pioneer stock; he was the grandson of Lindsey Applegate, wagon train leader and trail blazer in …

Jesse Applegate, an influential early Oregon settler, is most remembered for his leadership role in establishing the Applegate Trail. Born in Kentucky on July 5, 1811, to Daniel and Rachel Lindsay Applegate, Jesse moved with his family to St. Louis in 1821. He was educated at Rock Springs Seminary in …