The Charles and Melinda Applegate House in Yoncalla is the oldest known residence in Oregon that has remained in continuous family ownership since its construction. As one of the most authentic of Oregon’s remaining pioneer houses, it was listed in the National Register of Historic Places in 1974. The house, beautifully sited on the original Applegate donation land claim, is framed by mature trees and other historic plantings made by generations of the Applegate family.

Charles and Melinda Miller Applegate were part of the Great Migration of 1843 and initially settled in Polk County. By 1850 they had relocated, along with Charles’s brothers Jesse and Lindsay, to the Yoncalla Valley.

The first residence on the property was a log cabin, which was replaced by the current house situated to the east of the cabin site. Built between 1852 and 1856, with the Classical Revival influences popular at the time, the simple and elegant two-story “double house” was constructed using locally manufactured lumber, brick, and sandstone. Window glass was shipped around the Horn to Scottsburg and brought to the site by Charles Applegate and his sons.

The one-story kitchen wing, which dates to the 1860s, faces a re-created herb garden containing many of the herbs and plants that Melinda Applegate used for culinary and medicinal purposes and to dye fabric.

The Applegates are known for helping to establish the Applegate Trail and for their contributions to early Oregon politics. In Yoncalla, the Applegates and the Komemma people, led by Camafeema (also known as Chief Halo), established strong ties, and the families lived together peacefully in the area for generations. This friendship persists to the present day among descendants of both family groups, some of whom continue to live in Yoncalla and throughout Oregon. 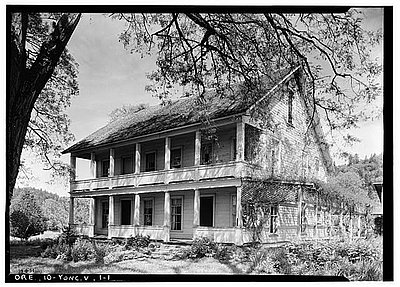 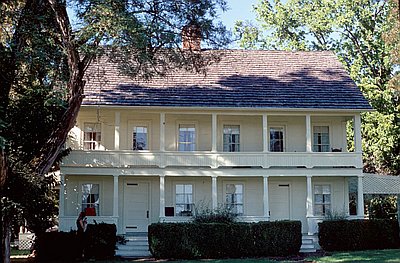 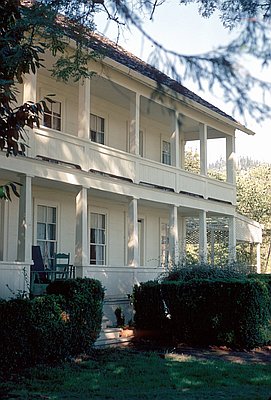 Chief Halito, commonly shortened to Chief Halo (meaning “having little” or “needing little”), was leader of the Yoncalla Kalapuya tribe and was married to Du-Ni-Wi, one of several wives. He remained on the Applegate family donation land claim in the Umpqua Valley after removal of other tribes to reservations. Despite …

Jesse Applegate, an influential early Oregon settler, is most remembered for his leadership role in establishing the Applegate Trail. Born in Kentucky on July 5, 1811, to Daniel and Rachel Lindsay Applegate, Jesse moved with his family to St. Louis in 1821. He was educated at Rock Springs Seminary in …