Photographer Lily White once professed: "Alone—controlling the power, directing the course—one might be so filled." Dubbed the "Captain" by Columbia River boat officers and crews, White is best known for the photographs she made while traveling on her custom-built houseboat with her friend and fellow photographer, Sarah Hall Ladd.

Lily Edith White was born in Oregon City on May 10, 1866. Her mother, Nancy Hoffman White, had crossed the plains from Illinois at age eleven with her parents and twelve brothers and sisters; and her father, Edward Milton White, worked as a riverboat captain. Her grandfather, Samuel Simpson White, served as justice of the peace and probate judge in Portland and was elected a member of the legislature in 1847. He built the Lot Whitcomb, the first steamer on the Willamette River.

White joined the Oregon Camera Club on March 3, 1898. Founded in 1895 with a membership of eighteen, the Camera Club selected new members by ballot. Honorary and “lady” members enjoyed all the privileges of the club but could not vote or qualify for office. Members’ work was showcased at annual exhibitions that also served to publicize the club.

White's proficiency in photography was such that in June 1899 the club employed her as assistant secretary. She also assumed the position of club demonstrator to instruct the group. In 1900, when White demonstrated “Negative Taking” at the club, she listed her livelihood as “Artist, Oregon Camera Club.”

The Oregon Camera Club opened its fifth annual exhibit in 1899, with 300 photographs on display. A local newspaper credited White with responsibility for the members’ improvements and the subsequent growth in membership, which had reached 175.

White participated in Oregon Camera Club exhibits in 1900 and 1901 and exhibited her photographs in the San Francisco salons at the Mark Hopkins Institute of Art in 1901 and 1902. She became a nonresident member of The Camera Club of New York in 1902. That year, White’s peers in the Oregon Camera Club presented her with an honorary membership. For unknown reasons, she resigned from the club in 1904.

In 1903, White and Sarah Ladd were among the first associate members admitted into the Photo-Secession, an avant-garde group of photographers organized by Alfred Stieglitz in New York City. This placed them among the most prominent artistic photographers of their era, though White never exhibited her work with them.

At about the same time, the two women began spending time on the Columbia River, living on the Raysark, an 80-foot-long houseboat equipped with running water, an up-to-date darkroom, and a photographic “outfit.” They created an extensive collection of photographs of the river, many of them published in The Pacific Monthly, owned by Ladd’s husband, Charles E. Ladd.

In 1906, the magazine published three articles highlighting White's work, including “From the Log of the Raysark,” White's personal experiences as captain of her houseboat. The Columbia River and Puget Sound Navigation Company published a promotional brochure, "Up the Columbia," with photographs by White and other local photographers.

By 1905, White was no longer making photographs, and in 1909 she was listed in the city directory not as an artist, but as a Christian Science practitioner. She moved to Carmel, California, in 1923, and died there from "apoplexy" on November 14, 1944. 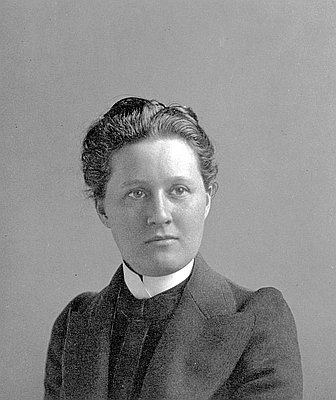